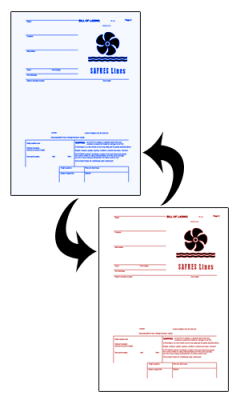 The world of shipping and freight is very dynamic and several changes may happen during the course of a shipment..

Some may be simple amendments, but in some cases, the changes or requirements may necessitate the issuance of a Switch Bill of Lading..

Before we look at what is a switch bill of lading, let’s review the types of bills of lading and how these are issued..

1) When a B/L is issued in Original(s) to a “named” consignee it is referred to as a “Straight B/L” and a straight B/L is a NON-NEGOTIABLE & NON-TRANSFERABLE DOCUMENT..

2) When a B/L is issued to a “named” consignee but without any originals, it may be considered as a “Sea Waybill“.. This B/L is also a NON-NEGOTIABLE & NON-TRANSFERABLE DOCUMENT..

Back to the Switch Bill of Lading,

A “Switch” bill of lading is NOT another type of Bill of Lading..

The KEYWORD here is “in exchange of” or “substituting“.. This clearly implies that the second set of bills of lading cannot be issued while the full first set is still in circulation and active..

Why do customers require a Switch bill of lading..??

Switch bills may be requested for a few different reasons..

What can and cannot be changed in a Switch Bill of Lading..??

In my opinion, the only safe area that can be really be allowed to be changed in the switch bill of lading is the shipper, consignee, notify information which is usually displayed in what I term as Part 1 of the bill of lading..

TT Club considers additional elements/information listed below may be changed provided that the new information is true and correct and does not affect the carriage and delivery..

The below details should never be allowed to be changed

The club further advises that the shipping line/agent should

“obtain written confirmation from your client, setting out in detail his requirements for the new bill of lading. If significant changes are requested to the cargo details, you should consider getting both evidence to support the changes and an indemnity from the client to protect you in the event of a dispute with the consignee.”

Depending on the shipping line and their coverage, a bill of lading may be switched anywhere around the world for shipments from anywhere to anywhere..

For example in a shipment from New York to Antwerp, the bill of lading may be switched in London as long as the shipping line in question has offices in London.. Usually a switch bill of lading happens in a location that may not be on the route of the cargo.. 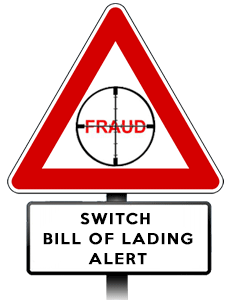 Is the issuance of Switch Bill of Lading legal..??

While there is nothing to say specifically that issuance of a switch bill of lading is illegal (unless there is willful intent to commit fraud), it seems to be the concerted view of almost all P&I clubs, that a switch bill of lading issued with any misrepresentation or information contrary to the first set issued, without the express acceptance and understanding of the buyer is a fraudulent document..

In order to protect themselves from any possible claims arising out of issuing switch bills of lading, the shipping line/agent have to ensure that

NAU sheds more light on the matter from a claims company perspective..

What has been your experience of issuing/requesting for switch bill of lading or any adverse issues due to same..??