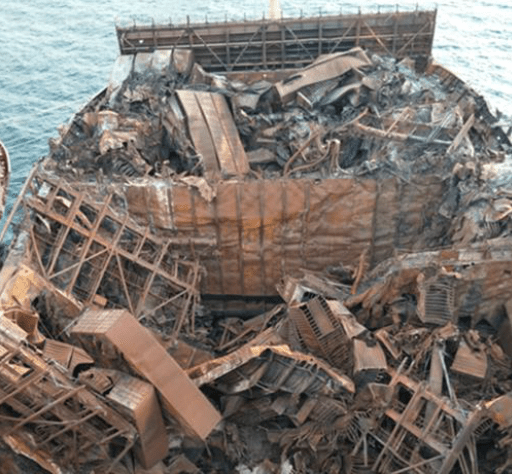 On the 6th of March 2018, Maersk Honam, one of Maersk’s ultra-large containerships caught fire in the Arabian Sea while en-route from Singapore to Egypt..

The Singapore registered container ship which was carrying 7860 containers encountered a severe fire that started from no.3 cargo hold about 900 nautical miles west of the coast of India..

The crew tried to fight the fire by commencing boundary cooling and subsequent release of carbon dioxide (CO2) into the cargo hold but were not successful in extinguishing the fire..

The Transport Safety Investigation Bureau of Singapore (TSIB) which is the air, marine and rail accidents and incidents investigation authority in Singapore was tasked with conducting the investigation into the fire on board the Maersk Honam and they recently released their final report on the incident..

As per the report, since most of the evidence were destroyed by fire, it was not possible to conclusively determine the cause of the fire..

However, the presence of chlorine-smell smoke which was noticed at the onset of the investigation indicates the possibility that one or more containers in no.3 cargo hold contained Sodium Dichloroisocyanurate Dihydrate (SDID)..

SDID which is classified under Class 9 in the IMDG Code is an active ingredient in dry bleaches, dishwashing compounds, scouring powder detergent sanitizers, swimming pool disinfectants, water, and sewage treatment..

The ship was carrying around 1,000 tonnes of SDID which was stowed in a stack of 54 containers in no.3 hold.. As per the carrier’s stowage planning program there were no issues with the stowage of the containers on board..

The report says that there is a possibility that the containers containing SDID were compromised by self-decomposition of the SDID and that the block stowage of the SDID further exacerbated the rate of reaction and heat production which resulted in an uncontrollable spread of the fire..

The report states that

Given the susceptibility of SDID to exothermic decomposition in the presence of free water or impurities, serious consideration must be given to the prospect that the decomposition could be initiated as a direct result of the inherent properties of the cargo itself.

The special provisions (SP135) within the IMDG Code allows for the classification and carriage of SDID under Class 9 (UN no.3077), thus not recognising the potential thermal instability of this material, possibly as a result of legacy carriage requirements recognised nearly 40 years prior.

As a result, despite these secondary hazards, SDID was stowed under-deck where the main fixed firefighting means in this area was CO2, which is ineffective to tackle fires associated with such materials.

The report found that the provisions in the IMDG Code would need to be reviewed because the secondary hazards presented by SDID are not captured in the current provisions of the IMDG Code and that appropriate measures, similar to those adopted for calcium hypochlorite as identified by CINS should be considered for adoption..

Along with the above, the report also found some deficiencies in how the master of the ship and the crew handled the situation..

The crew is said to have raised the general alarm instead of the fire alarm which could have resulted in the delay in closing the magnetic fire doors.

The non-closure of these flaps resulted in no.3 cargo hold not being sealed prior to the discharge of CO2..

The report highlighted the fact that the cargo booking process depends on accurate declarations (by the shipper) which is extremely important to prevent situations that may result in inappropriate stowage of dangerous goods..

The report suggested that it would be good if the cargo booking process had some technological means to be able to extract certain key properties of cargo declared to be shipped (freight tech companies – this could be a gap for you)..

While having this facility may not necessarily eliminate cargo misdeclaration, it may aid in reducing such a probability, the report concluded..

Although there was no evidence of a cargo misdeclaration, which led to the fire in no.3 cargo hold, the investigation team noted that the current cargo screening process in the industry is not able to ensure declarations by shippers, which are based on trust, match the description of the cargo in the container, as such a process could be too onerous and labor-intensive if carried out manually..

Learning from these lessons, Maersk Line announced that after a thorough review of current safety practices and policies in the stowage of dangerous cargo, they implemented a set of new guidelines to improve safety across its container vessel fleet..

“We appreciate the thoroughness of the investigation in identifying opportunities to further improve our emergency response towards ship fires. We also appreciate TSIB’s recognition of the preventive measures taken by the A.P. Moller – Maersk and that TSIB is recognising the need to review legislation linked with the safe transport of Dangerous Cargo. The main safety recommendations in the report we have already implemented across the fleet over the past two years and we will be studying the report further to understand how to best make use of the recommendations going forward,”..

Palle Laursen, Chief Technical Officer, A.P. Moller – Maersk added, “This was one of the most serious incidents in the history of A.P. Moller – Maersk and we are devastated that five colleagues lost their lives and that five families lost their loved ones. The magnitude and intensity of this fire made it impossible for any crew to successfully contain, making it key that we as an industry take steps to address the root cause to ensure seafarers never find themselves in a similar situation. We hope this investigation will initiate a more holistic, industry wide approach where we address the concerns regarding containerised dangerous goods across the entire supply chain – starting at the manufacturing level and following through until the box has been safely delivered at destination to the customer,”..

Imagine the mind set of a seafarer (as is the case with more than 200,000 crew still stranded on board various ships around the world) who has been on board a ship for 10-12 months at a stretch without a break because they are not allowed to leave the ship due to COVID-19..

If you look at the image below which shows how close the damage was to the accommodation, you realise the dangers and consequences that the seafarers go through.. 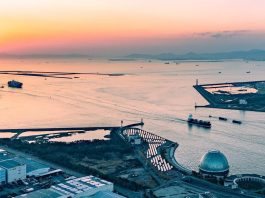 Confusing liner shipping schedule jargon may soon be a thing of... 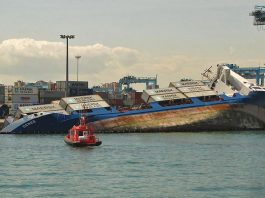 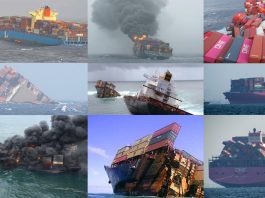