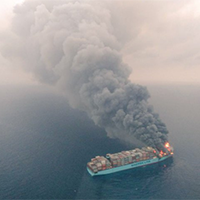 On the 6th of March 2018, Maersk Honam, one of Maersk’s ultra-large containerships caught fire in the Arabian Sea while en-route from Singapore to Egypt..

Five crew members perished in this incident which was one of several containership disasters that have happened in recent history..

Learning from these lessons, Maersk Line announced that after a thorough review of current safety practices and policies in the stowage of dangerous cargo, they implemented a set of new guidelines to improve safety across its container vessel fleet..

Maersk Line announced that these new set of principles called Risk Based Dangerous Goods Stowage have been developed in conjunction with a workshop conducted by Maersk Line along with the American Bureau of Shipping (ABS) and other industry stakeholders..

As part of this workshop, the company carried out a comprehensive Hazard Identification study that validated these new guidelines.. This included the evaluation of over 3,000 United Nations (UN) numbers of hazardous materials in order to further understand and improve dangerous cargo stowage onboard container vessels..

These new principles have been developed with the aim of minimising risk to crew, cargo, environment and vessel in case a fire develops.. The company announced that these guidelines have now been implemented across their fleet of more than 750 vessels across the globe..

The Risk Based Dangerous Goods Stowage principles have also been presented to the International Maritime Organization (IMO) as well as the Danish Maritime Authorities..

“All cargo aboard Maersk Honam was accepted as per the requirements of the International Maritime Dangerous Goods Code and stowed onboard the vessel accordingly. Despite this, as the fire originated in a cargo hold in front of the accommodation which held several containers with dangerous goods, it had an unbearably tragic outcome,” says Ole Graa Jakobsen, Head of Fleet Technology at Maersk.

“This clearly showed us that the international regulations and practices with regards to dangerous goods stowage needs to be reviewed in order to optimally protect crew, cargo, environment and vessels.”

Cargo covered under the International Maritime Dangerous Goods Code will no longer be stowed next to accommodation and main propulsion plant which is defined as the zone with the lowest risk tolerance..

Utilising statistics on container fires in the Cargo Incident Notification System (CINS), Maersk defined which UN numbers can be stored in each risk zone..

Maersk Line also announced that in the coming months, a review aimed at creating best management practices for dangerous goods stowage will be undertaken with participation from ABS, Lloyds Register, the International Group of PandI Clubs, National Cargo Bureau, the TT Club and Exis Technologies..

Once the project is completed the best management practices will be published and presented to the International Maritime Organisation (IMO)..

As we commemorate World Maritime Day 2018 today under the theme “Our Heritage – Better Shipping for a Better Future” such principles and actions become quite relevant and important..