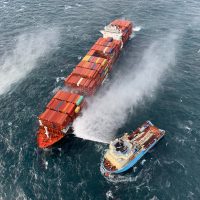 Further to the incident of ZIM Kingston losing containers overboard and container fire on board, today’s update is that the fire is reported to have been controlled but the vessel is still smoldering as of Sunday afternoon as per JJ Brickett, a federal incident commander and spokesperson with the Canadian Coast Guard.

“What we are seeing on the deck here is basically the shell of those containers, and presumably, everything that was aboard or inside those containers has been consumed in the fire” said Brickett.

Speaking at a virtual press conference on Sunday, Brickett said plans are in place and crew are ready to handle any eventualities should an incoming storm cause any problems to the vessel and also the firefighting efforts.

“We’ve been monitoring, both from shore and on board, if she is moving — she has not,” Brickett said. “And then in the unlikely event that she does move her anchor, we have numerous salvage tugs, including a Coast Guard asset that are around and there’s precautions taken onboard so that a tow can effectively be made very rapidly.”

“What they were attempting to do is let the fire burn down. In other words, the container consumes itself with the fuel while keeping everything else around it cool so they wouldn’t ignite,” he said. “When we are looking at the imagery, we can’t see any scorching or charring of those adjacent containers. That’s a really good sign.” added Brickett

The ZIM Kingston has been anchored at Constance Bank since the night of 22nd October after it lost 40 containers about 12 nautical miles off the west coast of Vancouver Island, near Bamfield, while navigating rough seas.

It is understood that the ship will remain at Constance Bank alongside emergency tow vessels and the Canadian Coast Guard who will be monitoring the vessel due to the storm expected to move through the region.

Officials have also addressed concerns about the air quality as a result of the fire with ongoing monitoring from multiple locations to ensure there is no risk to those onshore.

While the ship itself is not on fire, official have set up a 2 nautical mile emergency zone around the anchored ship with other ships and mariners asked to stay clear of the area. The source of ignition of the fire is still unknown at this stage.

16 of the 21 crew members were evacuated to Ogden Point while five remained on board to fight the fire as the Canadian Coast Guard doubled the emergency zone around the vessel to 2 nautical miles.

The owners of Zim Kingston are said to have appointed Resolve Marine Group as salvors for the salvage operations, as per Michelle Imbeau, spokesperson for the Canadian Coast Guard.

“Officials will conduct a full inventory of containers and contents once the fire is found to be fully extinguished,” Imbeau said.

The U.S. Coast Guard is reportedly working with the Canadian incident command center in tracking the 40 containers that fell overboard due to rough weather during the journey with containers being spotted about 22-27 miles off the west coast of Vancouver Island.

“With a significant weather event arriving Sunday, recovery of the containers may be challenging,” Imbeau, spokesperson for the Canadian Coast Guard, said in a press release.

“Both the U.S. Coast Guard and Canadian Coast Guard continue to broadcast warnings as the containers pose a significant risk to mariners.”