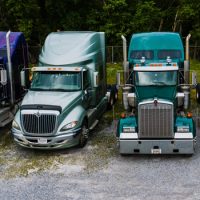 The extraordinary growth figures of the US retail sector cannot hold up forever. 2022 might be the year it falters, taking the trucking market along with it.

The holiday shopping season, which we’ve discussed at great lengths over the last few months, is finally coming to an end. Consumers have largely been cushioned from seeing the true impact of the chaos playing out within supply chains — primarily due to the ingenuity and grit of shippers who planned early and fought relentlessly to get their inventories to the warehouse in time for the holiday season.

There’s a word called ‘jugaad’ that’s frequently thrown around in the Indian subcontinent. The word recently made its way to the English lexicon and would do beautifully to describe this situation. Quite simply, jugaad is an innovative way to problem-solving using the limited resources available. And in a year of outrageously high freight rates and a crippling shortage of capacity, retailers across the world have indulged in a liberal dose of jugaad to get by.

In a year of outrageously high freight rates and a crippling shortage of capacity, retailers across the world have indulged in a liberal dose of jugaad to get by.

For instance, retailers pushed discounts and offers meant for the year-end shopping season way earlier than usual — right from July. This was an attempt by the retail stakeholders to mellow the buying peak during the actual shopping season, to balance out their inventory drawdowns in the wake of a tight freight (and labor) market.

Returns logistics is another example. Consumers can notice returns on their Amazon purchases having longer due dates than the norm, say, a few years ago. Longer return time windows is a retailer banking on the consumer characteristic to be lazy and act late on the return, thereby reducing returns traffic clogging logistics networks, especially during a festive season (like Christmas, which usually results in a returns tsunami in January).

But all said and done, the historically long freight delays meant retailers that relied on imports were in for a rough year. It’s almost a certainty that several businesses would be staring at inventories still stuck in the logistics pipeline, at some port or terminal yard or intermodal hub — inventories, which should have been stocked for the holiday season that’s about to end.

So what happens to all the inventories that come in late for the party? They’d end up as surplus stocks for the next year — a metric that could eventually impact how retailers go about restocking their depleted inventories.

With inventory levels being at a record drawdown through 2021, any upcoming lull in consumer demand could allow retailers get their inventory to sales ratio to more respectable pre-pandemic levels.

A couple of graphs from Jason Miller, associate professor of supply chain at Michigan State University, can help continue the argument.

The graphs reflect that while sales figures have shown extraordinarily high growth since the pandemic summer of ’20, inventory levels have stayed true to their pre-pandemic growth forecasts. In essence, retailers will possibly continue to stock inventories at the same levels, but retail sales figures would likely fall (closer to the forecast levels) as the service sector gets back to normal (which will happen as the country slowly begins to shrug off COVID-19 and learns to co-exist with the virus).

Dean Croke, the principal analyst at DAT, mentioned that the truckload market has been broadly cooling over the last month, with trucking spot rates going down despite volumes going up by 12% week-over-week on the DAT network.

That said, the last week has bucked the trend. Croke contended that it could be due to truck drivers returning home for Christmas, scooping out a chunk of available capacity — thereby increasing spot prices.

“However, the broader trend is that rates have plateaued and are beginning to fall across major lanes that have been very hot, such as Los Angeles to Phoenix and Atlanta to Orlando,” said Croke. The gradual fall in trucking spot prices a few weeks before Christmas can be because of the lack of urgency in shipping as the shopping season finally comes to a close.

“The length of haul dramatically shifts at this stage, as freight destined for this season is already in middle warehousing and en route to the final-mile regional distribution,” said Croke. “This takes the pressure off long-haul trucking. Suddenly, there’s less volume where there was congestion all this time because it’s shifting from inbound to outbound.”

While there’s a slight uptick in trucking spot prices over the Christmas weekend, this could be all but temporary. The manufacturing purchasing managers’ index (PMI), which acts as a bellwether to economic output, has been falling in the US ever since its peak in July ’21, standing at 57.80. The Chinese manufacturing PMI does not look good either, with it going into contraction in Nov this year — the first time since the crash in March ’20. This indicates that imports to the US might not be at the same elevated levels next year as in ’21.

The manufacturing purchasing managers' index (PMI), which acts as a bellwether to economic output, has been falling in the US ever since its peak in July '21, standing at 57.80.

That aside, a lot more trucking capacity has already been added to the market — close to 100,000 just this year. Trailer orders that had briefly gone down in October have gone up to 31,000 orders in November, as registered by ACT Research. Major OEMs are now opening their order queues after remaining closed for a significant part of this year because of supply chain disruptions. This will only lead to more capacity flowing into the market next year — another reason why the market is on course for a price correction.

“I heard from a furniture business guy that there’s gonna be a lot of cheap furniture in the market next year, thanks to all the inventory that got late for the holiday season. When interest rates go high, it is going to impact a lot of retailers who are in debt to finance their business,” said Croke. With no more stimulus checks in sight and student loan deferrals ending by mid-2022, the headwinds to lower retail sales are strong.

With significant truck capacity incoming next year and retail sales forecast and PMI indicators not looking good, a fall in retail sales over the next year would not be surprising. And when that happens, we could see a repeat of ’19 where we had high activity followed by record truck order cancellations and bankruptcies.

Bankruptcies might be inevitable, considering the environment and the circumstances that saw the creation of new trucking capacity this year. A considerable chunk of the capacity added is in the form of owner-operators and small carriers, who would have taken loans to buy or lease equipment to cash on the hot freight market today. But when interest rates climb higher, labor and fuel expenses go out of control, and the retail volumes finally start to tank, these smaller fleets will be the first ones to feel the heat.

Consolidation trends within the logistics industry will continue to accelerate going into 2022. Retailers and logistics service providers are keen on vertically integrating their supply chain operations, leading to some exciting acquisitions and mergers this year. Companies see customer experience as pivotal to their growth prospects, making logistics operations a differentiator rather than a cost center.

Swedish auto battery maker Northvolt has unveiled its first lithium-ion production-ready battery cell, with commercial deliveries planned in 2022. The company has signed over $30 billion in contracts with customers including BMW, Volkswagen, Volvo, and Polestar — making the $12 billion worth Northvolt a direct competitor to Tesla’s battery-manufacturing division.

Autonomous trucking company TuSimple announced the successful pilot run of its truck on open public roads without human monitoring behind the wheel. The truck was navigated 100% by TuSimple’s Autonomous Driving System (ADS) for an 80-mile stretch that runs on surface streets and highways between Tucson and Phoenix in Arizona. This success is a milestone in the company’s pursuit to introduce purpose-built trucks by 2024.

The Federal Maritime Commission (FMC) has recently updated its guidelines that govern shippers filing actions against container shipping companies, making it easier for trade associations and shipping cooperatives to bring actions, helping protect individual companies from potential retaliation. Via this updated guidance, complainants with genuine claims will be protected from attorney fee liability, even if the claims are unsuccessful.

“The market has gotten that tight. You’re creating much more competition, which means much more pricing power for the employees to get into the job.”

– Bill Fraine, chief commercial officer for GXO Logistics Inc., which has tripled its workforce in the region during the past two years to about 3,900 employees, and still has 600 vacancies.