As you are aware and as has been featured several times on this website, misdeclaration of container weight has been a big problem for ship owners and operators and is reported to have caused several accidents..

BISON Group Limited, a tech company in New Zealand claims to have found a unique solution for shippers to weigh the containers in a quick, easy and cost effective manner.. 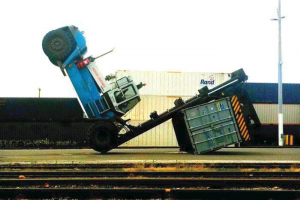 BISON Weighing Jacks are compact, portable scales that weigh any size container to within +/- 25 kg and feed the weight data into existing information systems.

“Weighing Jacks are unique in that they allow an operator to accurately confirm a container’s weight and load distribution at the packing point” said Greg Fahey, BISON’s Managing Director. “Not only does this set shippers up to comply with SOLAS and the new CTU Code, weighing the container at the packing point helps an operator optimize shipments, avoid dispatching overweight containers and eliminates the cost of weighing individual cargo items or diverting laden containers to a weigh bridge.“

Misdeclared container weights pose serious safety risks and cause major accidents. From mid-2016, amendments to SOLAS (the Convention for Safety of Life at Sea) will make it mandatory for shippers to accurately verify the weight of all export containers and communicate the weight in a timely way to the shipping line. Without a verified weight, the container is not permitted aboard a vessel.

Here’s a video that shows how it works [youtube_sc url=”https://youtu.be/siGvsZlmrvY ” title=”Bison%20Weighing%20Jacks”]

“It’s clear to industry where the rules are heading” says Fahey. “The challenge shippers have is finding practical ways to adapt to them. Typically, accurate container weighing involves some combination of truck, weigh bridge, container handler or crane. This not only ties up capital-intensive plant and equipment, the packing and weighing tasks often can’t be performed at the same time and place. Weighing Jacks solve that problem.”

Targeted at exporters, consolidators and other operators loading-out grounded containers, the BISON system synchs with a smart phone App and cloud database, enabling the weight and other shipping data to be stored, printed and sent automatically to designated logistics partners.

BISON Weighing Jacks have been welcomed by logistics companies, freight forwarders and stevedores, interested in the immediate benefits the jacks offer their operations and with a view to getting ahead of next year’s mandatory weighing regime.