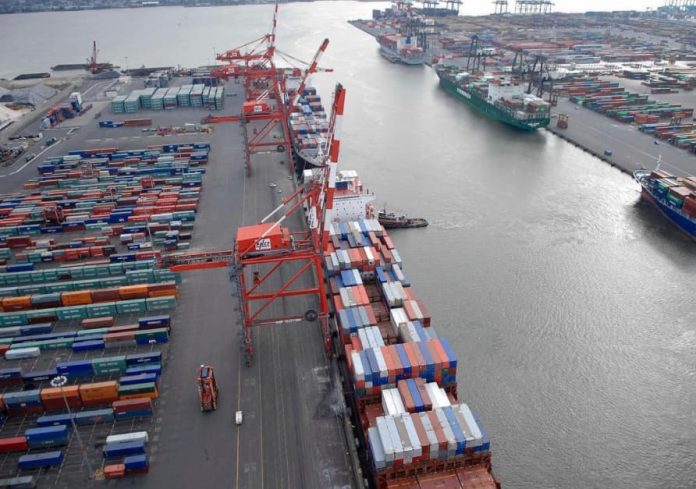 Suffern, NY, March 22, 2022 – Transit times for containers moving between ports in China and their counterparts on the US West Coast declined sharply in March offering further relief for shippers after two tumultuous years.

Freight rates on the principal trade lanes between China and the US also softened on the back of significant declines in January and February.

“The biggest port complex in the US, Los Angeles / Long Beach, is finally showing signs of heading towards the “new normal”, whatever that might look like in the post-pandemic landscape,” said Shabsie Levy, CEO and Founder of Shifl. “Transit times and delays at the berth are both moving in the right direction with gate-out times reaching the sorts of levels we were used to in the busiest months pre-pandemic.”

“The Fed’s decision to raise interest rates to address concerns about inflation could result in a slowdown in retail demand at a time when inventories appear to have reached levels last seen in March 2020,” said Levy. “It appears that after two years of turmoil shops are finally fully stocked. What happens next on the world’s most important trade lane depends on how fast the Fed puts the squeeze on inflation.”

The Federal Reserve raised interest rates for the first time in more than three years on March 16, signaling its intention to bring an end to two years of stimulus. Six further rate increases are planned this year to arrest inflation rates that have risen to their highest rate for more than 40 years.

With inventories in the US reaching $658 billion at the end of January, according to the last statistics issued by the US Census Bureau, shippers have put the brakes on the frantic scramble for space with a notable impact on freight rates between the world’s two largest economies.

The recent increase in fuel prices has also added to the reluctance and worries of shippers in placing new orders. Consumers are now forced to spend more on fuel which might result in a further decrease in consumer spending.

The sharp decline in freight rates is likely to continue as pressure for space subsides, especially given the already high level of retail inventories.

Freight rates for a 40’ container on the spot market between China and both the US west coast and US east coast have dropped by around 50% so far this year from its peak.

The decline is expected to continue while retail inventories remain at current levels. The last time retailers were holding onto more stock ($662 billion) was in March 2020, just before restrictions were placed on global movements as a consequence of the pandemic. 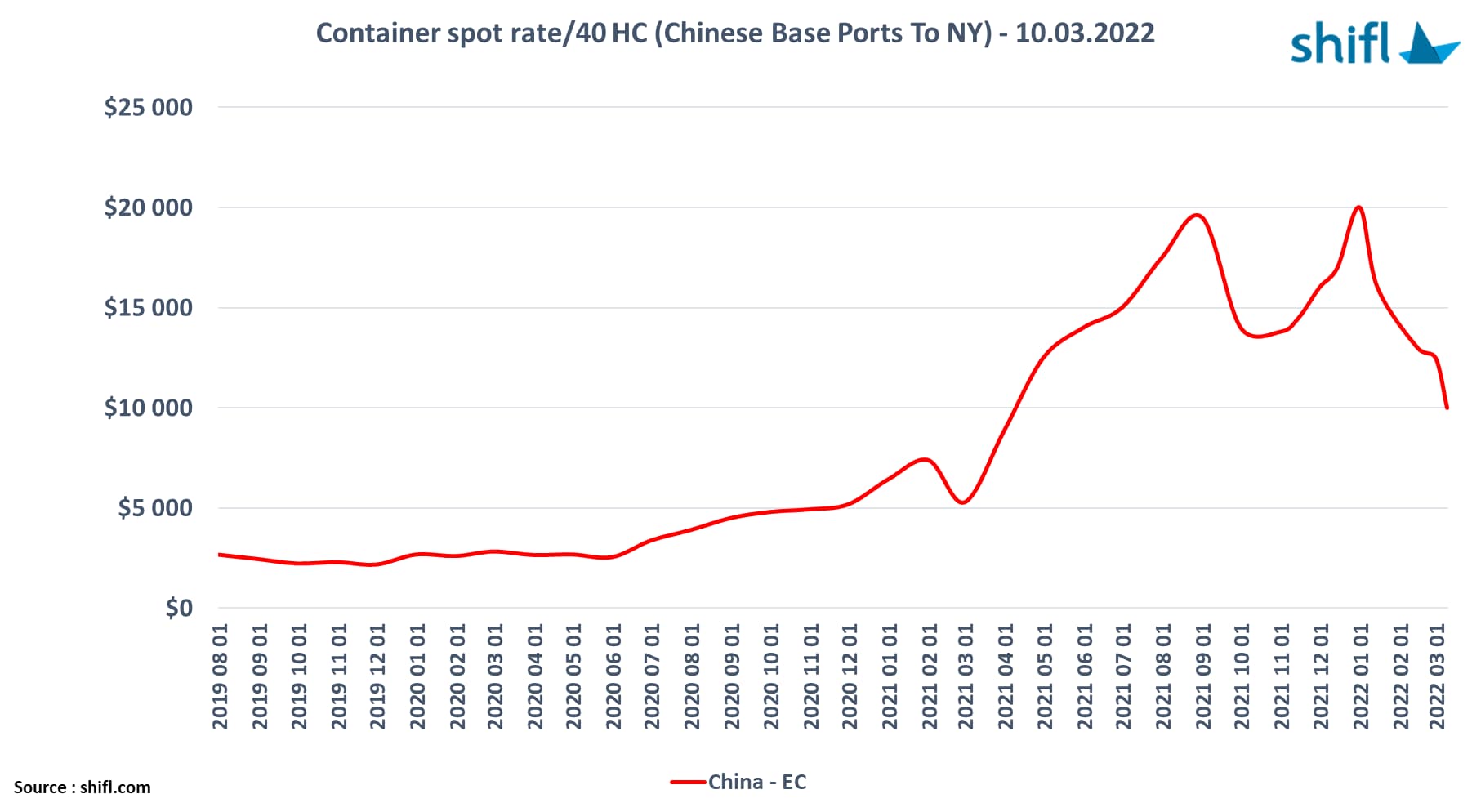 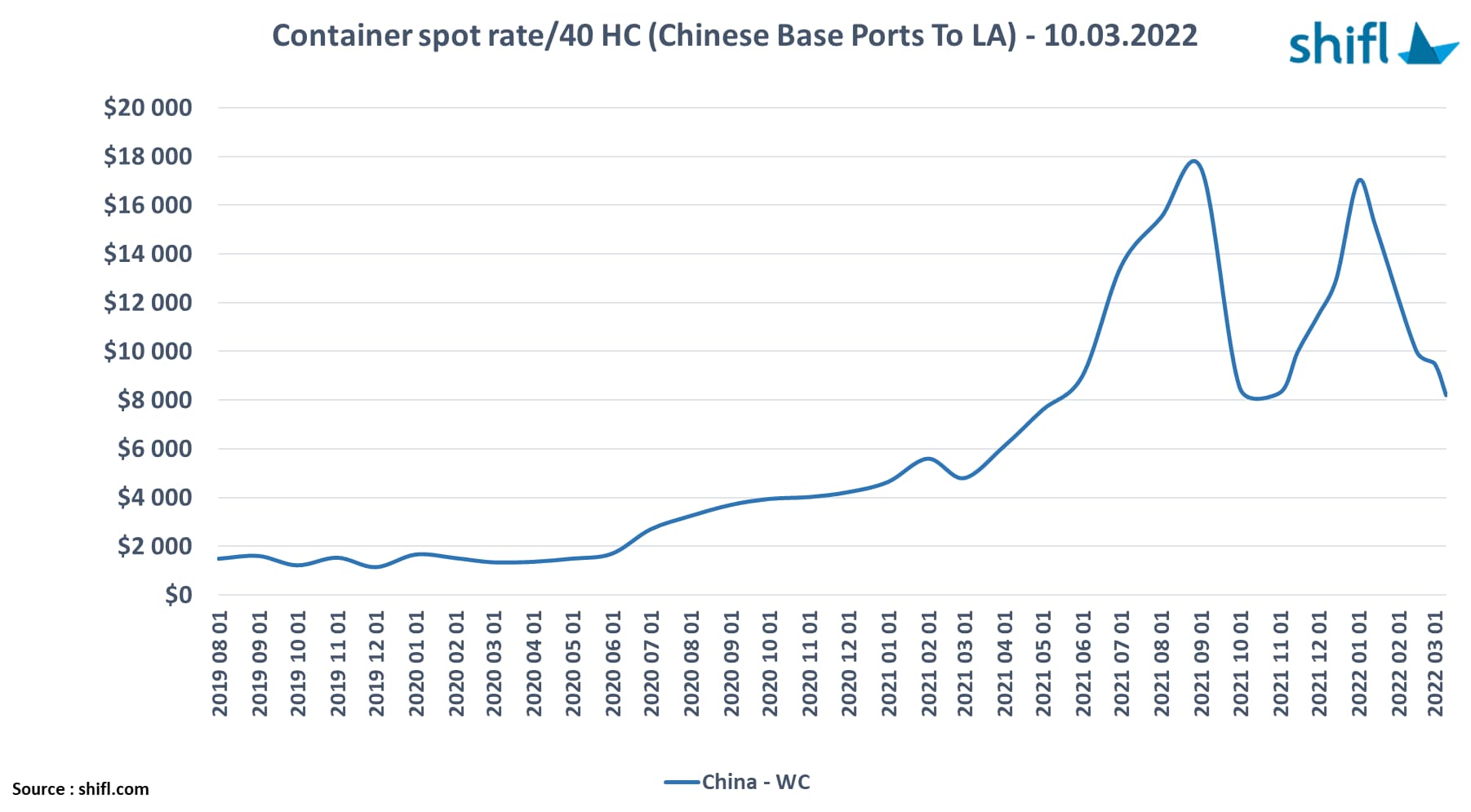 With high retail inventories taking the pressure off shippers, there are signs of respite for those battling with the significant problems still being felt in the supply chain.

The all-important transpacific trade lane between China and ports on the US West Coast has gone through a turbulent two years with congestion at the berths of Los Angeles and Long Beach reaching its peak with more than 100+ vessels waiting to berth.

In the last three months, the principal indicators have been in sharp decline as the industry has thrown resources at the problem, adding tonnage, extending operating hours in the ports, and switching volumes to the US East Coast in a bid to unblock bottlenecks in US ports and railways.

There are signs that the worst is behind the trade between China and the US West Coast, with transit times slashed by 21 days from the peak of 52 days in December to 31 days in March. Transit times from China to Los Angeles were down 20% from 39 days to 31 days between February and March.

An overall reduction of 40% in transit times this year has put shippers back to where they were in September 2021, although transit times need to come down by another 30% to reach the lowest level recorded in May last year. It will, however, take time for the improvements to be reflected in the transit times. 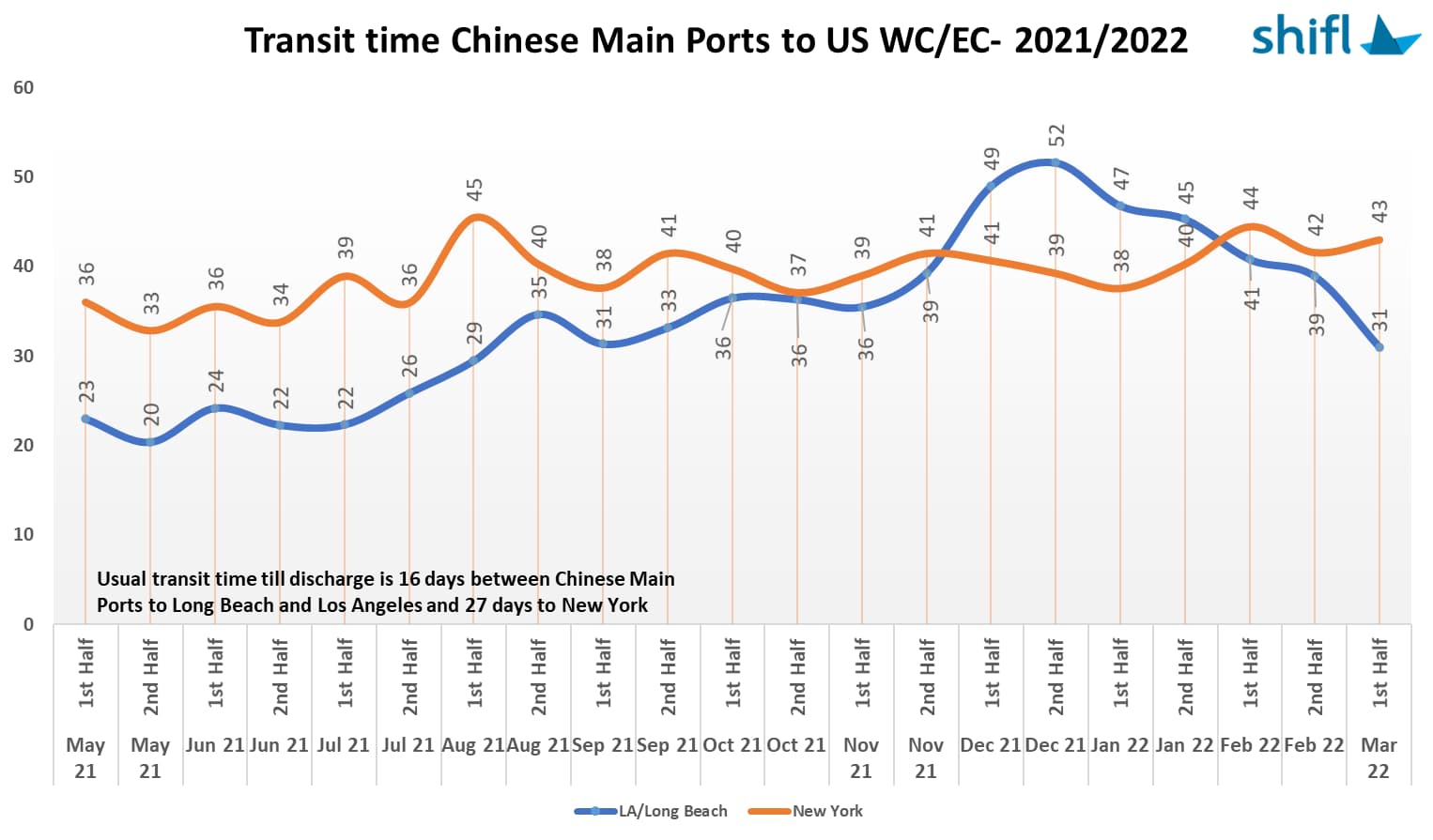 Transit times to the US East Coast have been more stable over the last 12 months hovering between 33 and 45 days. Last month, they moved in the opposite direction, increasing by one day from 42 to 43 days between February and March. Pre-pandemic transit times on this route were around 27 days.

As shippers worked their way through the backlog, dwell times in the ports were also improving according to data. Containers in Los Angeles/Long Beach and New York/New Jersey were now taking 4 days to leave the port compared to 11 days and 5 days respectively in October last year. 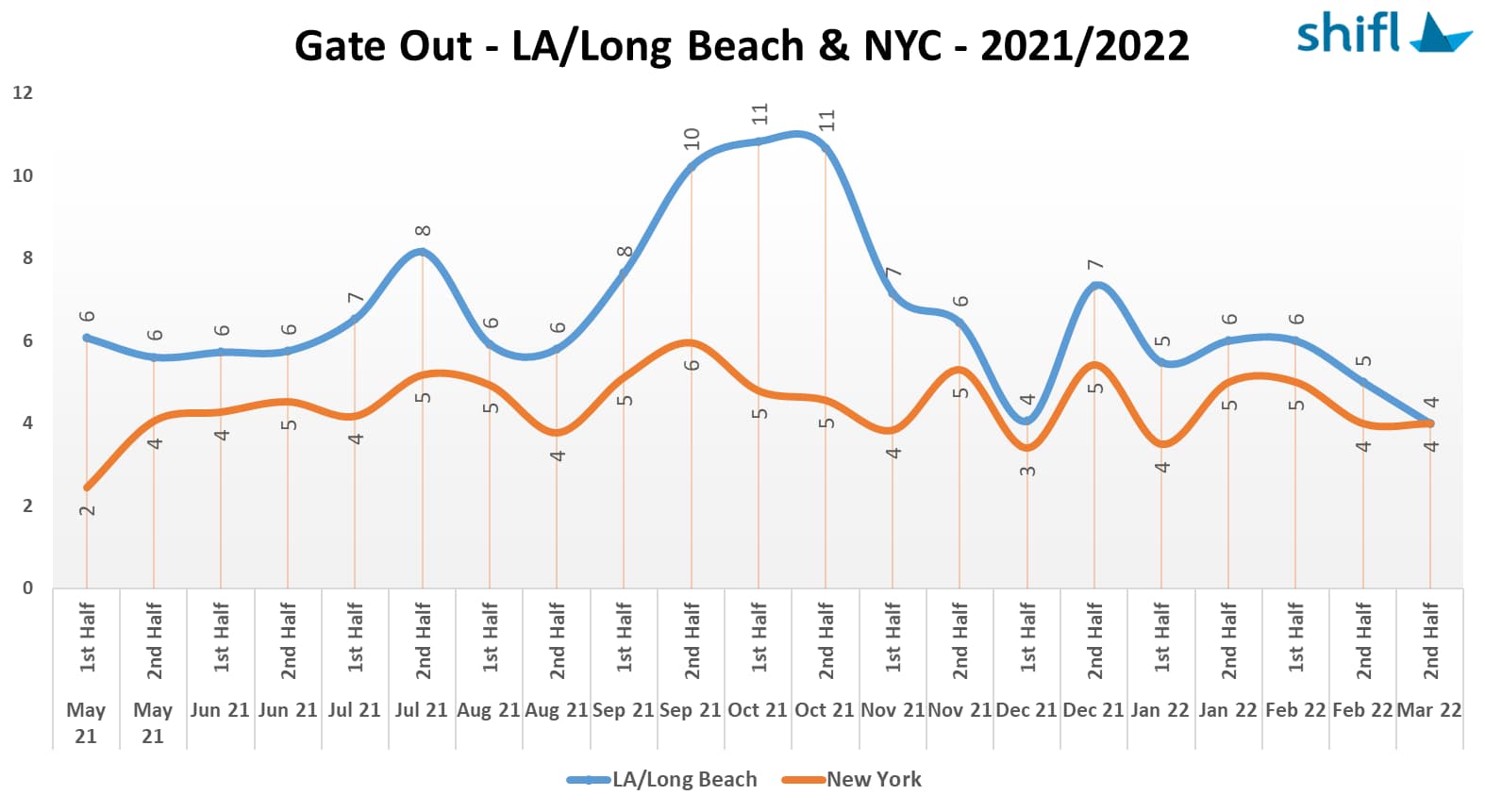 About Shifl: Shifl is bringing the supply chain into the future with technology and innovation that brings a huge array of real-life benefits to its customers. If you are an importer looking to bring your business into today’s digital age, be more in control of your shipping processes, and pay less — Shifl is for you. Shifl is headquartered in New York and maintains a presence in China, India, Vietnam, Malaysia, Bangladesh, Georgia, Dominican Republic and The Philippines. To learn more, visit https://shifl.com.