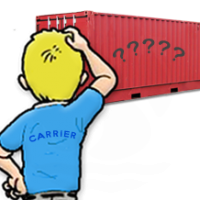 We all have seen the clause SAID TO CONTAIN or STC in a Bill of Lading issued for an FCL shipment.. What does it mean and should the Said To Contain clause be allowed or not..??

As explained briefly in Part 3 of my Parts of a Bill of Lading post series, for containerised cargo, especially if it is an FCL, it is VERY IMPORTANT that the shipping line shows the SAID TO CONTAIN clause on the bill of lading.. 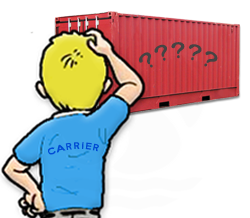 The reason it is important for the carrier is that in an FCL shipment, the shipping line does not get involved in the packing of the container and therefore does not know “what (the cargo)” and “how many / how much (weight/packages)” of the what is packed inside the container..

The shipper collects the empty from the shipping line, packs it, seals it and delivers the full container to the port.. The line may not even get to sniff the container..

In a bill of lading that reads

Suppose the container reaches destination and the receiver opens the container to find there are only 700 bags instead of 750 bags as per example above, natural instinct would be to hold the shipping line responsible just because they carried the cargo..

The cargo, the quantity and the weight inside the container are not known or verified by the shipping line (although the SOLAS VGM may be proof of the weight) because they are not involved in the packing of the container..

Therefore the shipping line needs some protection against potential claims relating to shortage etc, so they clause the bill of lading with Said To Contain..

This means the shipping line is stating that they don’t know the cargo, the quantity and the weight inside the container and they are accepting the shipper’s declaration of the goods under the Said to Contain condition..

A valid clause then, for sure..

However, the Said To Contain clause is considered by some authorities like Customs and Border Protection (CBP) in U.S.A as being generic in nature and is related to their concerns about terrorist threats and that weapons, bombs or other devices may be smuggled into the country under this “generic cover”..

Hence post 9/11, CBP in USA advised that they cannot accept the Said to Contain Clause..

In line with this, some shipping lines seem to have stopped showing this clause on the bill of lading..!!

However, for a shipping line, this could be a double-edged sword.. By choosing not to show the Said To Contain clause in order to trade in the USA, the carriers may be waiving their rights to an important clause that can prevent them from any claims relating to shortage or loss of goods..

In the case of bulk and breakbulk shipments, this clause is not shown because the carrier can clearly see what, how many and how much they are receiving and in what condition..

But with FCL shipments, the carrier does not have this option and without this clause, they may be held responsible for any shortages based on the cargo quantity stated in the bill of lading..

Andrew Trasler of the TT Club has addressed this concern with the CBP who have given assurance that the prohibition on the use of the term “Said To Contain” applies only to the cargo manifests submitted by the shipping lines to CBP and not the bill of lading..

As per CBP, as long as there is a precise description of the cargo in the bill of lading including the Harmonised Tariff Schedule (HS Code) under which the cargo is classified, weight of the goods etc, the words “Said To Contain” may still be used in bills of lading..

On the bill of lading, Said To Contain clause is usually accompanied by another clause – Shipper’s Load Stow and Count..

I have read in some publications/papers that Shipper’s Load Stow and Count clause may be used or is being used as an alternative to the Said To Contain clause..

I disagree with this because in my personal opinion these two clauses serve different purposes..

Shipper’s Load Stow and Count refers to the condition that

What the Shipper’s Load Stow and Count clause doesn’t say is what the “goods” are..