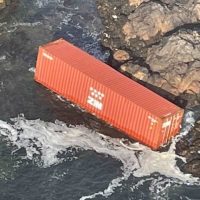 No more containers have been found. That is the news from the Canadian Coast Guard about the maritime disaster surrounding the ZIM Kingston that lost an estimated 109 containers in rough seas off the coast of British Columbia in Canada and is still anchored while fire fighting efforts continue.

The ZIM Kingston faced rough weather West of the Strait of Juan de Fuca caused by a low pressure system that is said to have impacted the region from Thursday the 21st Oct. The hurricane force caused the sea to rise to about 9 meters, resulting in an estimated 109 containers falling in to the sea.

4 of the 109 containers washed up ashore near Cape Scott some 400 kms away from where the ship is currently anchored. As per the Canadian Coast Guard, the containers have spilled refrigerators, toys, yoga mats and clothing onto remote beaches near Cape Scott Provincial Park on the northernmost tip of the island.

Photos from Jerika McArter an educator from Eke Me-Xi Learning Centre, Port Hardy, B.C., shows the impact that maritime disasters such as this have on the environment. Students from the Centre were on a weekly field trip to Palmerston Beach, learning about the protection of the natural environment got a first hand view of what they could be dealing with in the future.

CTV News from Vancouver is quoting McArter as saying “There is stuff everywhere: fridges, rain boots, shoes, toys, Chinese checkers boards, baby oil, food packs, hair wax, Styrofoam, backpacks and more. This is only one of the containers and the pictures don’t show how bad/sad it is.”

In the meantime, the Canadian Coast Guard has confirmed that the debris is from at least one of the containers that were lost and that anyone who discovers cargo on the beach should report it immediately to the coast guard. As per the Canadian Coast Guard spokesperson Michelle Imbeau, “yoga mats, clothing, children’s toys and games will be among the debris likely to drift ashore in the coming days”

The vessel’s owner, Danaos Shipping Co., has in the meantime confirmed that it is working with a salvage contractor to develop a plan to locate and retrieve the lost containers and also working with an environmental company on the operation.

The Canadian Coast Guard is reportedly satisfied with the salvage work conducted so far. “Under the Wrecked, Abandoned or Hazardous Vessels Act (WAHVA) the owner of the M/V Zim Kingston is responsible for mitigating any hazards regarding the ship or its cargo,” a statement from the coast guard said. “To date, Unified Command is satisfied with the actions taken by the owner both at the ship itself, and in efforts to recover the containers and debris,” said the statement added.

The unified command is reported to include representatives from the coast guard, the B.C. Environment Ministry, the vessel’s owners, the Beecher Bay First Nation and the WSANEC Leadership Council.

Coast guard helicopters, along with aircraft from Transport Canada’s National Aerial Surveillance Program were searching for more of the missing containers an operation which has been hampered by the remote and rugged location as as per the Canadian Coast Guard.

The salvage team on board the Zim Kingston has been using thermal cameras to monitor for flare-ups with efforts focused on Bay 14 of the ship which is where containers that were loaded with tyres continues to be an issue. The team is also monitoring the air quality along B.C.’s coast. Once recovery and firefighting efforts are complete, it is expected that the Transportation Safety Board will launch a further investigation into the incident.