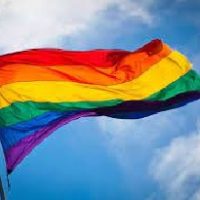 A rainbow means many things to many people..

A Rainbow is said to be a promise of better times to come, a motivation to continue and endure through dark times, a symbol for good luck and fortune and even a hiding place for pots of gold.

The rainbow flag is seen as as a symbol for the LGBTQ rights movement. Although the rainbow flag came into international prominence quite recently, it goes back to 1978 actually.

As per Brittanica, artist Gilbert Baker, an openly gay man and a drag queen, designed the first rainbow flag supposedly urged by Harvey Milk, one of the first openly gay elected officials in the U.S., to create a symbol of pride for the gay community.

Baker is said to have seen the rainbow as a natural flag from the sky, so he adopted eight colors for the stripes, each color with its own meaning (hot pink for sex, red for life, orange for healing, yellow for sunlight, green for nature, turquoise for art, indigo for harmony, and violet for spirit).

In their Sustainability Report of 2020, Maersk mentioned that “Diversity and inclusion are part of our value system, and our support for social justice and anti-discrimination is also expected by our employees“.

In line with this, Maersk launched their Maersk for Inclusion Excellence groups in the North American Region.. As part of this initiative, Maersk painted two (1×20′ & 1×40′) of their shipping containers with a rainbow to symbolise inclusion and diversity and integrated these containers into their fleet.

On the 11th of March 2021, these containers embarked on a world tour on board the Maersk Edmonton from APM Terminals Pier 400 in Los Angeles to Yokohama..

These containers will stop at several locations across Asia and Europe before finishing its tour at the Copenhagen Pride 2021 between 12th and 22nd August 2021.

Rachel Osikoya, Head of Diversity & Inclusion, A.P. Moller – Maersk said, “We are really excited that our rainbow containers have now started their way around the world. While the outside of these containers represent the company’s stand on diversity and inclusion, the inside of the containers will represent our Employees’ personal commitment.”

“These containers somewhere along their journey will be a reminder to those who feel different or like they don’t belong that they are not alone, and someone, somewhere, is standing with them and accepts them regardless of their race, gender, age, ethnicity, sexual orientation, religion or disability.” said Rob Townley, Regional Head of Special Project for Maersk.

Maersk’s rainbow containers have served as a symbol of inclusion and diversity, boldly sharing with the world the company’s stand on creating a culture where all employees, partners, and customers feel welcomed and can be themselves without judgment.

They not only serve as a symbol for the company, but they have also been involved in important humanitarian work, including the delivery of relief cargo to hurricane survivors in the United States just this past year. Maersk’s clients are also showing interest in the use of these rainbow containers to move their goods around the world.

The Maersk Rainbow Containers have arrived at @APMTerminals in Rotterdam on board Maastricht Maersk for the start of the European leg of their world tour.

You can also feel free to share it on this platform.