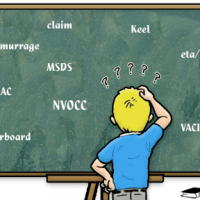 NVOCC is one of the terms you would have heard quite often in day to day business particularly if you are in the US or Chinese markets..

NVOCC stands for Non-Vessel-Operating Common Carrier is someone who undertakes to perform all the services of a VOCC but without owning or operating vessels, as the name implies..

The US market probably has the largest number of NVOCC operators in the world and the Federal Maritime Commission (FMC) which regulates their operation in the US, have some stringent regulations to be followed..

Before offering services in the US Trades, an NVOCC is required to follow certain protocols including

These tariffs must be open for public inspection and show all rates, charges, classifications, rules, and practices between all points or ports on their service routes.. The location where these tariffs are available online can be seen on the FMC website..

A non-US based NVOCC must also include in its tariff filing, details of an agent for the handling of their services in the United States..

In the other big NVOCC market of China, its Ministry of Transport (MOT) implemented NVOCC Freight Filing Rules in 2010 which required them to register with the MOT, and to show proof of “insurance” or of cash security deposits of up to RMB 800,000 or U.S. $125,000..

Without this registration certificate issued by the MOT, US NVOCCs could not issue their house bills in the US/China trade lanes without risk of substantial sanctions and penalties..

It was reported subsequently that during the China/US tariff turmoil in 2019, the MOT had quietly deregulated these burdensome registration procedures and dropped formal application registration and insurance requirements for all NVOCCs, including those from USA..

The requirement by the Shanghai Exchange for NVOCC filing rate ranges however, remains in place..

There may well be other countries and major jurisdictions which have specific regulations for the operation of NVOCCs but at this stage those requirements or the need for registration of an NVOCC in these places is clear as mud..

If any of you know of any jurisdiction where the registration of a NVOCC is strictly followed, please comment below..

The NVOCC in turn, gets a bill of lading from the ocean carrier which is known as the Master Bill of Lading (MBL)..

The only information that should be different in the MBL from the HBL is the shipper, consignee and notify details which will usually be the details of the NVOCC at the POL as the shipper and their office/agent at the POD as consignee.. All other details should remain the same..

In terms of the issuance of HBL, the International Maritime Bureau (IMB) estimates from its work in verifying Bills of Lading, that over 95% of all improperly issued Bills of Lading are issued by NVOCCs..

The IMB further identified that there is a prevalence of issuance of incorrect bills of lading by the NVOCC which is then presented to banks and other stakeholders in the trading and finance chain, with the aim of defrauding the trade finance system, possibly for the purposes of multiple financing, money laundering, etc..

To overcome this, in 2019, the IMB established a register for Non Vessel Operating Common Carriers who agree to abide by the IMB Code of Conduct for the proper issuance of NVOCC Bills of Lading..

The purpose of the Register is to improve anti-fraud standards and provide a mechanism to recognise participating NVOCCs who adhere to a minimum standard of anti-fraud measures in their operations..

Banks who are members of the IMB can now check whether the NVOCC named on the bill of lading presented to them has signed up to the IMB Code of Conduct..

This provides some sort of assurance to the banks and customers that the NVOCC bills of lading issued by these NVOCCs meet acceptable standards.. There are of course consequences for NVOCCs who fail to comply..

An NVOCC is often termed as a “carrier to shippers” and “shipper to carriers”.. What does this mean..??

At the most basic level, an NVOCC enters into volume based ocean freight arrangements with various shipping lines operating across various trade lanes.. Meaning, an NVOCC buys space from an ocean carrier in bulk (like a wholesaler) and sell that space to various shippers or forwarders at a marked up rate (like a retailer) on the same ship/route..

An NVOCC may or may not offer their own or leased containers to customers and in most cases will use the shipping line’s containers..

Based on this arrangement, an NVOCC can create their own tariff based on which they sell space on these liner services to their various clients.. An NVOCC’s client list may include

Depending on certain jurisdictions and markets, an NVOCC’s activities may include but not restricted to below :

As an example, Expeditors International who was ranked by Descartes Datamyne as number 1 in the Top 50 NVOCC operators (Asia/USA) shipped around 423,000+ TEUs for 2020..

They would have very preferential rates with all carriers that they use based on their volume support.. A shipper or forwarders who maybe shipping 10,000 or 20,000 TEUs a year (big as it is) may not be able to secure same rates from the carriers..

A NVOCC can and sometimes do own and operate their own or leased containers and depending on the various types of contracts, a NVOCC is accorded the status of a virtual “carrier” and in certain cases accepts all liabilities of a carrier..

In line with this, a NVOCC will have their own agent at Port of Load and Discharge to handle the requirements for the release of goods and containers to the clients..

For a carrier, having a client like an NVOCC may be beneficial also due to the volumes that they can support which then becomes a base cargo for the carrier..

The business of transportation of containers from A to B involves several stakeholders across the chain.. An NVOCC is a key stakeholder in this business and have a very important role in some of the cases acting as a bridge between carriers and shippers..

This may sometimes be confusing, as a freight forwarder is also said to be a bridge between a carrier and a shipper.. Although this may be true, there are some differences between an NVOCC and a Freight Forwarder..

4 thoughts on “An NVOCC and their role in container shipping”