You might have heard of the terminology Tramp service or Tramper or Tramp vessel and also about the terminology Liner Service.. What is the difference between the two..?? 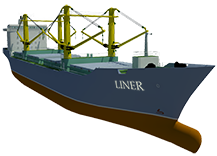 Liner Service – is a service that operates within a schedule and has a fixed port rotation with published dates of calls at the advertised ports.. A liner service generally fulfils the schedule unless in cases where a call at one of the ports has been unduly delayed due to natural or man-mad causes..

Example : The UK/NWC continent container service of MSC which has a fixed weekly schedule calling the South African ports of Durban, Cape Town and Port Elizabeth and carrying cargo to the UK/NWC ports of Felixstowe, Antwerp, Hamburg, Le Havre and Rotterdam..

Liner shipping relates not just to containers, but also to other types of cargoes which have a regular and fixed routing/service like RoRo services, Bulk cargo services on a COA or long-term charter.. 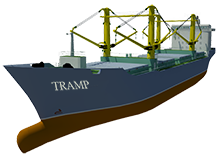 A Tramp Service or tramper, on the other hand, is a ship that has no fixed routing or itinerary or schedule and is available at short notice (or fixture) to load any cargo from any port to any port..

Example : A ship that arrives at Durban from Korea to discharge cargo might carry some other cargo from Durban to the Oakland in the West Coast of USA which is in an entirely different direction.. From Oakland, it could carry some cargo to Bremerhaven..

One of the main differences between Liner and Tramp would be in the type of contract of carriage and Bill of Lading used..

In the case of a Liner, generally the shipping line operating the liner service will have their own pre-printed bill of lading or use a BIMCO ConLineBill, whereas in the case of a Tramp service (which may be covered by a Charter Party), a bill of lading like the BIMCO ConGenBill will be used depending on the cargo, charter party etc..

60 thoughts on “Difference between a Liner and Tramp service”