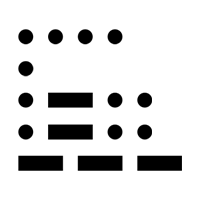 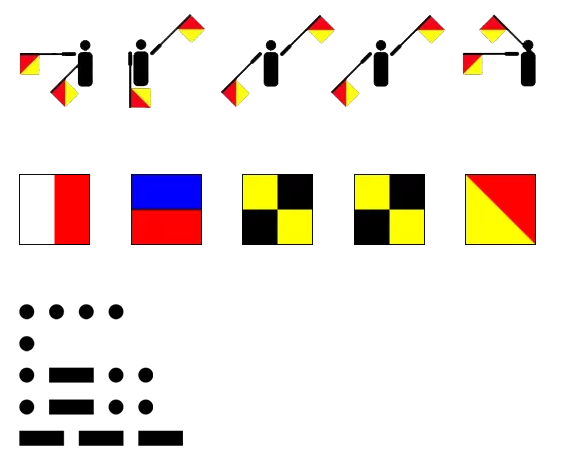 These are not just some random flags, squares, dots and dashes.. I said  H E L L O  using the International Code of Signals..

What are International Code of Signals and why is it important..??

From the time that languages came into being, till date there is no ONE common language around the world that is understood by all..

Every country, region has its own language which brings along with it communication barriers..

Majority of the seafarers come from countries like Philippines, Indonesia, China, Russia, Turkey, India, USA, Japan, Korea, Canada and Malaysia.. Most of these countries are Non-Native English speaking countries so one can imagine the gap in communication between ships..

The International Code of Signals (ICS) was created to overcome these language barriers and allow ships to communicate with each other especially in situations relating to safety of navigation and people..

The International Code of Signals is an international system of signals and codes used by ships to communicate short but important message between themselves..

The International Code of Signals achieved this by firstly creating a standardised alphabet and number scheme through the use of flags and phonetics.. The Phonetics were used in order to avoid similar sounding alphabets such as D, T, B, P etc..

The 26 English Alphabets were allocated a phonetic code as below :

These standardised set of signals are communicated using a variety of methods such as Flag Semaphore, Flag Hoist, Radio Telegraphy and Radio Telephony..

The Semaphore signaling system is a system based on the positioning of a pair of hand-held flags in a particular pre-set pattern..

One flag is held in each hand in various positions representing each of the letters of the alphabet.. The pattern is divided into eight positions: up, down, out, high, low, for each of the left and right hands..

The flag used is usually a red and yellow square divided diagonally..

The alphabets are represented as below.. 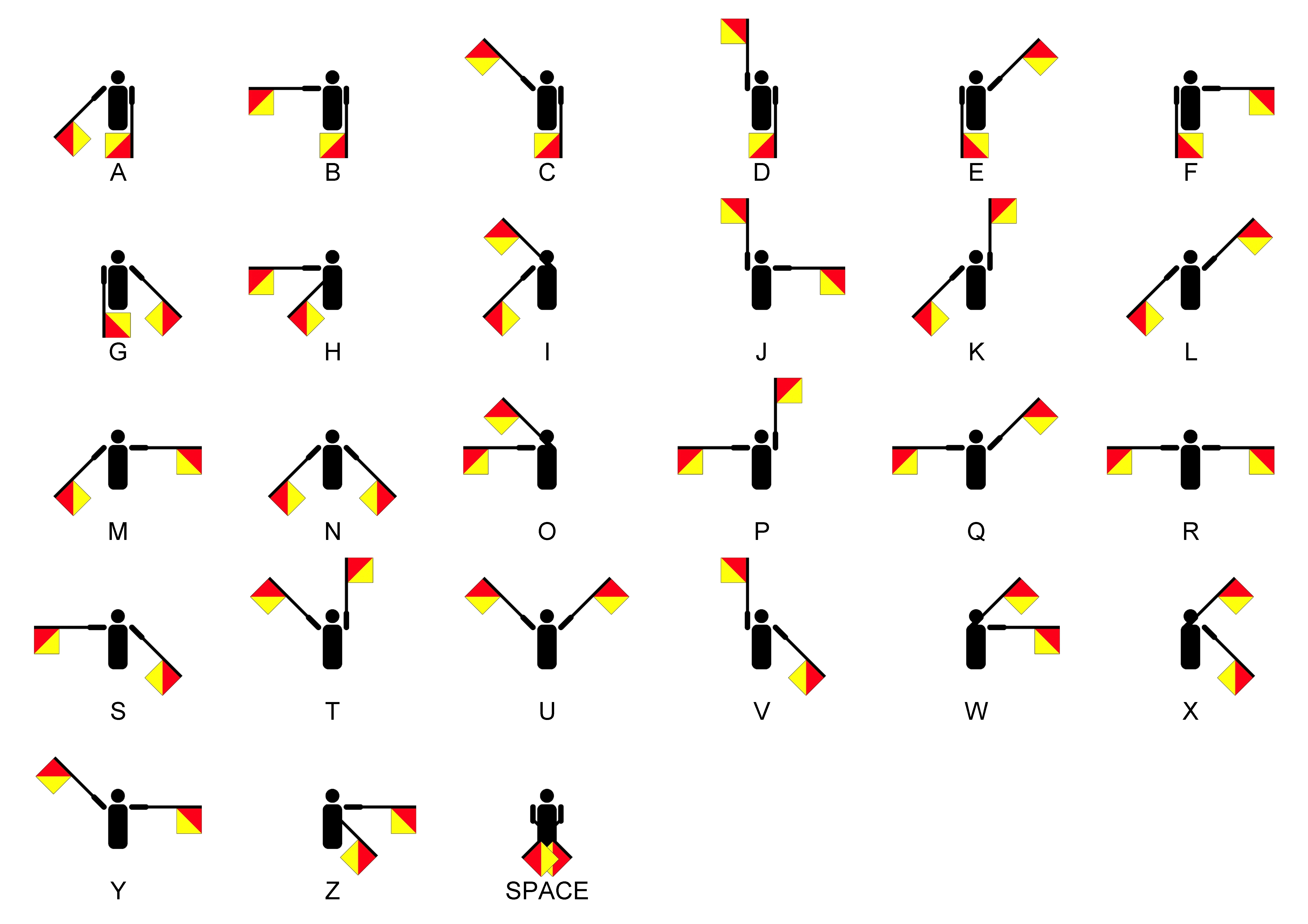 If you look closely, the semaphore flag signals follow a circular path with the first circle consisting of letters A to C made with the right arm, and E to G with the left arm.. D is shown using either hand.. In the second circle, the right arm is stationary at the position of letter A and the left arm makes the movements..

Similarly in the remaining circles (works out to about 7 circles in total), the right arm is stationary while the left arm moves.. The arms are kept straight when changing from one position to another..

These symbols and signals are most useful in cases where there are nearby ships but there is a communication failure.. Say for example you are on board a ship but your communication equipment is faulty and you have engine problems that makes maneuvering difficult..

If you need assistance from a nearby ship or you wish to notify the nearby ship about your problem, you could hoist the

“D for Delta” Flag which when raised alone, says “Keep clear of me; I am maneuvering with difficulty.”

or you could raise the

“F for Foxtrot” Flag to tell the other ship “I am disabled; communicate with me.”

Here is the full list of flag hoists, what they mean when used individually and the phonetic alphabets attached to these flags..

These flag hoists may also work in combinations to convey some important messages such as “I need a Doctor” which is conveyed with the hoisting of A for Alfa and N for November (AN) flags together..

All seafarers go through training in the International Code of Signals and irrespective of language used or the language that they have been taught in, the flags mean the same and all seafarers are able to decipher what is being communicated..

Now what is Morse code you may ask..

Morse code was a system of transmitting alphabets, numbers and punctuation marks using an arrangement of dots, dashes and spaces.. Morse code was transmitted as electrical pulses, mechanical or visual signs using a series of tones, clicks or flashing lights..

If you were skilled in the art of Morse code you could hear or see the code and decipher the message without any equipment..

Each Morse code symbol represented a letter, number or punctuation character and character was represented by a unique sequence of dots and dashes..

The duration of the dot was the basic unit for the measurement of time in the transmission of morse code.. A dash take three times the duration of a dot to transmit.. Letters in a word had space equal to three dots whereas words were separated by space equal to seven dots..

Even now in some cases where there are emergencies, the standard emergency signal SOS is transmitted using Morse code.. 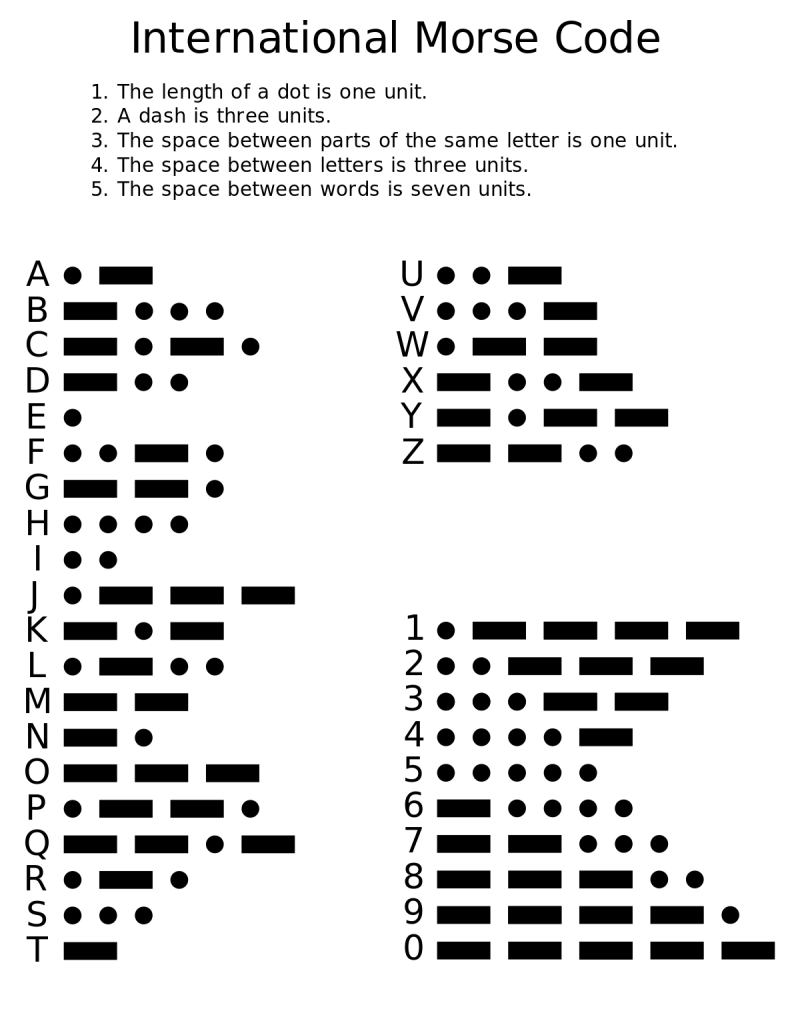 Here is a video of the English Alphabets expressed in Morse Code..

Radiotelegraphy uses a narrow frequency bandwidth and this allows for communicating without any interference or noise like with radio telephony which involves speech over radio..

Because of this advantage and also the fact that morse code also maybe transmitted using flashing lights like the Aldis Lamp shown in the image, radiotelegraphy is used in certain types of marine ship-to-shore communication (such as emergency calls), for weather and sea state bulletins by national maritime services, for point-to-point communication between fixed points, and for various special services that do not require high-speed transmission of information..

Some of the old timers (or even some of the current mariners) may have some interesting stories to share.. Maybe something for “A day in the life of…….”