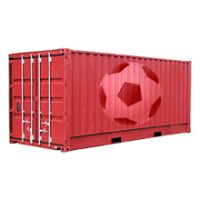 When Malcom Mclean an American trucking company owner/trucker turned inventor and Mechanical Engineer Keith Tantlinger got together to create the first shipping container in 1956, they definitely had no idea how viral their creation would go..

Whether as a part of the 23,498,710 TEUs in circulation right now carrying various cargoes across the world or being used as a student accommodation in South Africa or being used as a farm in Maryland, USA the ubiquitous shipping container has come a long way indeed..

But it looks like the simple yet efficient structural design and flexibility of the ubiquitous container continues to inspire people around the world to bring out the best..

The State of Qatar is an independent emirate (an Arabic Islamic monarchy) in the Gulf Region situated on a peninsula that extends from the Arabian Peninsula approximately 160 km (99 mi) north into the Persian (Arab) Gulf..

Qatar shares maritime borders with Bahrain, Iran, and the United Arab Emirates.. The peninsula is approximately 100km across and extends 200km into the Gulf.. Qatar has an area of 11,586 km² with a population of over 2.6 million and includes several islands such as Halul, Shraouh and Al-Asshat..

Why is this country important..?? Well, FIFA (The Fédération Internationale de Football Association) the highest governing body of football globally has chosen Qatar as the host of its 2022 FIFA World Cup..

Qatar is also very important because this will be the first time in the history of any major sports event, the stadium in which the games are played can be dismantled and reused elsewhere..!!! Say what..??

Yes you read it right..

The Ras Abu Aboud stadium in Doha, the capital of Qatar, is one of the 7 world cup stadiums for the 2022 event and will be the first World Cup stadium which can be completely dismantled and repurposed..

From the time of bidding for the hosting of the World Cup, Qatar was keen on helping another country develop its sporting facilities once this 4 yearly soccer spectacle was done..

How did they plan on doing this..?? Using the shipping container..!!

Around 1000 repurposed shipping containers will be arranged in an “elegant curved square” and each will be modified to contain elements of the 40,000-seat stadium, including removable seats, concession stands and bathrooms.. All the components are recyclable and reusable..

These shipping containers will be used as building blocks which will cut down on the amount of building materials required, creating less waste and reducing the stadium’s carbon footprint..

After the event, the stadium will be disassembled and the containers will be used to build another stadium elsewhere.. The stadium can be moved and split into two, or made into an arena..

“From the very early stages in the design, we have considered how every single component of the stadium can be reused, whether it’s the container or the steel structure that will hold the containers and the roof as well,” according to project manager Mohammed Al Mulla..

“Qatar is delivering superb results in terms of sustainability and innovation, including the proposed design for Ras Abu Aboud Stadium,” as per Federico Addiechi, head of corporate social responsibility at FIFA while the co-founder of Fenwick Iribarren Architects Mark Fenwick added “We are confident that this innovative and sustainable concept will be an inspiration for stadium developers and architects around the world, capable of creating aesthetically pleasing venues that offer new legacy possibilities“..

The Ras Abu Aboud Stadium is expected to be completed in 2020 and will be located on the waterfront of the West Bay area downtown and is one of eight proposed venues for the upcoming games..

Projects such as these display the versatility of these unassuming shipping containers which are finding many uses in our day to day life.. May there be many more environmentally friendly projects..