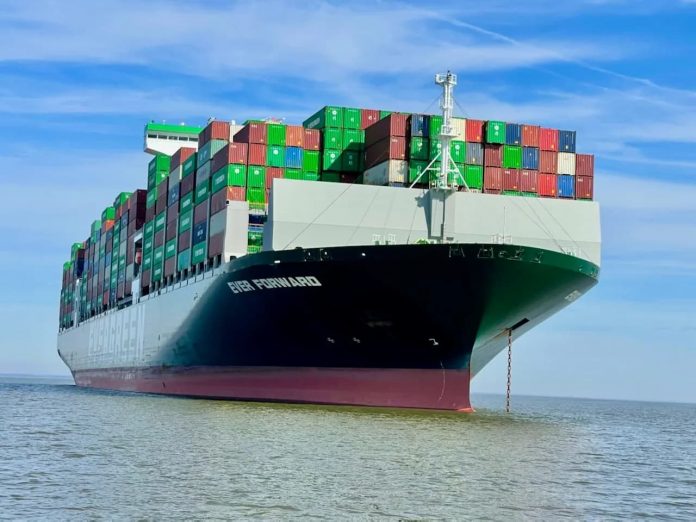 18 days and counting – that’s the number of days that the Ever Forward, a 11,850 TEU capacity container ship has been stuck in the Chesapeake Bay in the USA.

The Hong Kong flagged ship operated by Evergreen, the 7th largest container shipping line in the world, was on its way from the port of Baltimore in Maryland US to Norfolk when it is said to have missed a southbound turn in the Chesapeake Bay and ran aground (resting at the bottom) around 00:15 hrs (UTC) on the 13th of March 2022 near Gibson Island in the Chesapeake Bay channel.

As per the US Coast Guard, the ship is still stuck in 24 feet of water whereas the ship requires 42 feet to sail.

Efforts by authorities to free the ship have been unsuccessful so far with the last attempt on Tuesday the 30th involving 5 tugs. As per a tweet from William Doyle, Executive Director of Port of Baltimore, “MV Ever Forward grounding- dredging continues today, Sunday March 27, 2022. First refloat attempt will be Tuesday, March 29, 2022 using five tugs; two pushing on starboard side, two pulling from port side, one long pull from stern.”

“a second attempt will be made in coming days using two anchored pulling barges from the stern and five tugs.” said Doyle. Dredging operations are continuing to reach a depth of 43 feet to get to the 42 feet required for the ship to float.

In the meantime, Evergreen has issued a statement stating “In light of the increasing costs arising from the continued attempts to refloat the vessel, Evergreen declared General Average“.

General Average is a legal principle of Maritime Law under which, all parties who are involved in that voyage, shall be asked to proportionally share the losses resulting from such sacrifice..

“Subsequent to the completion of the initial dredging phase, the rescue team made two attempts to refloat Ever Forward on March 29 and 30. Unfortunately, both attempts proved to be unsuccessful.” the statement read.

Richards Hogg Lindley has been nominated by Evergreen as the GA adjuster. Evergreen has urged all cargo interests involved, and joint venture slot users to provide security bonds and necessary documents according to the adjusting rules that govern GA in order to take delivery of cargo after the vessel is freed and arrives at its future ports of discharge.