Port Elizabeth is one of the main ports in South Africa and is a main port of call for many carriers on the East/West Trade between Far East/South East Asia and the Americas and the North/South Trade between Africa and Europe..

Since the morning of 30th October, access to this main port has been restricted as STS Crane No.4 (Ship to Shore gantry cranes) at Berth 103 was blown off its rails due to the extreme winds that Port Elizabeth (PE) has been facing.. This crane is one of the 5 cranes operating in the port of Port Elizabeth..

The boom of the Post Panamax container gantry is blocking the entrance of the harbor which means no ships can berth at the container terminal and no ships can leave as well..

Several ships are reportedly stuck in the port while the authorities try to clear the wreckage and create accessibility to PE Harbor..

Part of the crane boom is overhanging into the port entrance channel. All commercial shipping has been suspended until a detailed assessment can be made. This will be done once the adverse weather has subsided.

According to Garth Sampson, the SA Weather Service’s Client Liaison Officer for the Eastern Cape; “The South African Weather Service had already issued warnings and cautions on Monday during the day and reports have been received that authorities had taken the necessary preventative precautions..

“The wind increase in speed over a relatively short period could have been a contributing factor to this happening.”

He said that the graph of the wind speed recorded at Shark Rock Pier shows the average wind speed (in blue) and the gusts (in red) until just after 08h00 on Tuesday morning.. 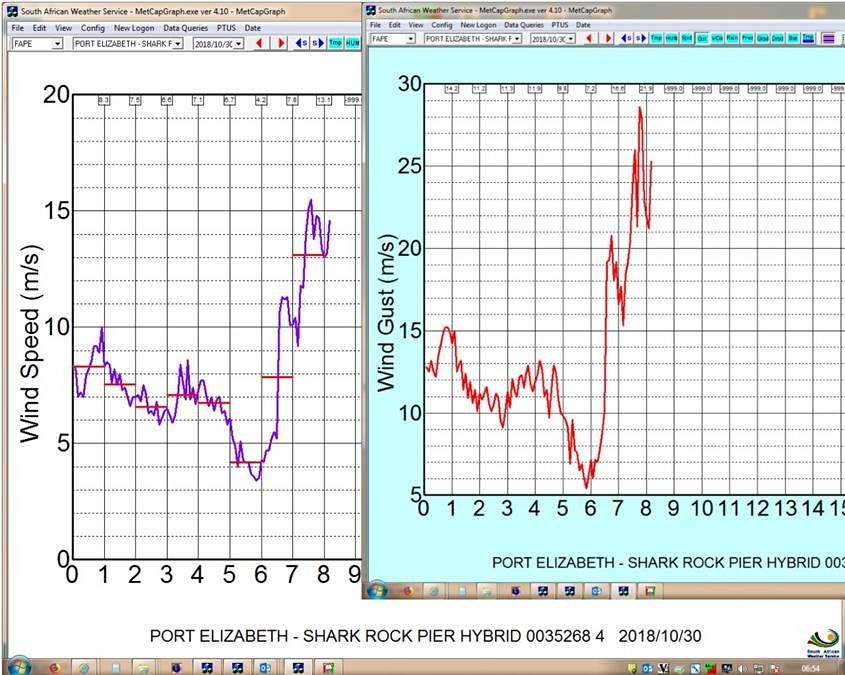 Port of Ngqura which is also within the Port Elizabeth metro and also a main port of call for majority of the container services was also affected due to the winds and all ships were evacuated from the port on the 30th to avoid any damages.. Ngqura is still affected by the wind and ships are expected to start berthing from later tonight (31st)..