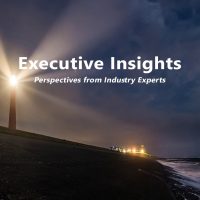 Executive Insights is a series by Shipping and Freight Resource that provides useful insights and thoughtful analysis on what is happening in the maritime, shipping, freight, logistics, supply chain and trade industries.. Executive Insights is your chance to pick the brains of industry veterans, leaders, and enablers..

Data the “new” gold, is in high demand all over the world and especially now in the shipping and freight industry.. But just data alone is not going to assist.. Data and its usage must be standardised and there must be a standardised approach to digitalisation..

A financial modelling exercise to quantify the potential cost savings of the usage of digital shipping documentation, namely the electronic bill of lading (eBL) showed that at a global economic growth rate of 2.4% through 2030 the industry could potentially save an estimated $4 billion+ every year if a 50% eBL adoption was achieved..

In this edition of Executive Insights, we caught up with Thomas Bagge, the CEO of the organisation that did this exercise Digital Container Shipping Association (DCSA), to discuss the various data standards available in the industry currently and how these standards can assist with the current issues plaguing the industry..

Below is the transcript of the discussion with Thomas Bagge.. 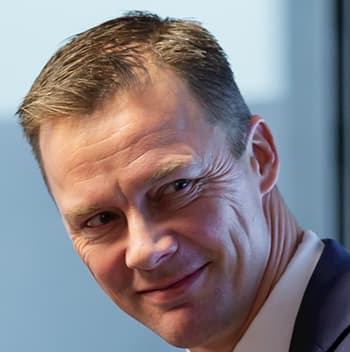 SFR:  Welcome to this edition of Executive Insights Thomas. It has been two years since DCSA came into existence. Could you give us a bit of background on the genesis of DCSA and how the progress has been since its inception..??

TB: Thank you and glad to be here. One of the reasons why we started DCSA, back in 2018-19, was because we saw many other industries that were significantly more advanced than we are when it comes to digitalization.

And in terms of what we’ve been up to, we’ve certainly been busy. The first thing we needed to do was have a discussion with our members around the process landscape or the way of doing business for non-competing processes. We call that the industry blueprint.

The industry blueprint is essentially meant to simplify and standardize or harmonize the way we do business as it pertains to non-competing processes. We have seen this in other industries like the airline and banking industries which are great examples.

For example, in the airline industry, everything is digitalized now and this happened because IATA has been defining the data requirements to book an airline ticket like the first name, surname, passport number and so on. At DCSA, we believe that by doing the same thing in container shipping, by harmonizing and standardizing what information is required, as an example, to make a booking, we believe that we will be able to further the digitalization of the documentation process. So that Industry Blueprint was quite crucial.

On top of that there is a data model, which is the architecture that we then use when we talk about the standard. For example, what kind of data goes into the arrival notification. We have done and continue to do work on cybersecurity, IoT, documentation, and we are working on operational processes. That’s what we’ve been up to for the past few years.

SFR: Ok, it seems like DCSA has definitely been doing a lot of things.. While standards are not a new thing, standards in the shipping industry, though, has been quite a challenging task based on the enormity and diversity of the industry.. What was DCSA’s strategy in first of all getting the industry to listen, because we are a tough bunch to listen to and follow standards among other things..??

TB: I think first and foremost, our membership group consists of nine of the top 10 container shipping lines representing more than 70% of the world’s containerized trade. So, I think that that’s one way of becoming a credible voice but another one is also the fact that we were not for profit. In addition,  we are Open Source and DCSA is not an initiative that is in any way intended to generate a profit for our members, or sales.

We hope that by the introduction of these standards the wider industry will get involved and add more credibility to it. In practical terms, a lot of the work that we do is with international bodies like the United Nations, IMO, BIMCO, European Commission, with the US regulators and other authorities to the world, like customs organisations, and ISO for that matter. So we try and bring various stakeholders together not just international organizations, but also freight forwarders, ports and terminals, and technology service providers.

Basically, we try in our approach to invite everybody to the table, to have a say about how we should proceed, but of course, we can’t promise anything. That’s really a challenge due to the enormity of the industry which can be quite overwhelming at times. But, if we don’t get started now, then everybody tends to lose.

SFR: How many standards does DCSA have currently, how many are in progress..??

We also have the ones that deal with operations like the Port Call standards, operational business schedules. We also have a number of IoT standards to make sure that over a period of time we will create an interoperable ecosystem where the IoT containers of any given carrier can speak with the partners on the VSA that they have, which we think is very crucial. Those are the fundamental ones that we have at the moment.

If we look at electronic documentation, personally I think that this will have a tremendous impact to global trade. For example, the UK Law Commission has just estimated that the world can have 24 billion pounds of additional trade if we were to go from paper to digital. And they also said that the environmental impact of removing paper from international trade would be equivalent to planting more than 400 million trees every year.

The opportunity is enormous and we are in a time where the need for sustainability is so high on everybody’s agenda and we cannot/we should not keep on perpetuating the way that that we’ve always done things with bills of lading when we have technology at our disposal to solve these things.

So that is something that really resonates with me, the sustainability measures and the data quality issues that will be resolved as a consequence of further digitalization, I think that’s really important.

SFR : I’m glad you brought up the topic of just in time, for main port call activities, because in the recent action plan of the Biden-Harris administration, released by the White House, they have indicated a series of actions including enabling data to support supply chains.. They made a call for new data standards for goods movement and I’m sure you must have been very happy to hear that. How does that tie into DCSA’s functioning.. ?? Do you think that this call for data standards will help the congestion issues that we’re facing currently..??

TB: In the short term it won’t, but in the medium to long term it absolutely will. I think part of it is because there are so many contributing factors to the situation we see, especially on the US West Coast and data standards is not going to solve those problems. There are equipment shortages, there’s a lack of truck drivers, regulations that has banned certain trucks from being on the road, so there are many things, but of course, data standards, you can say, is one of them.

I think it will help. I think that Government to business collaboration is essential for solving international trade. Businesses will have a hard time doing it alone and they need the assistance of governments. And here, I’m particularly thinking about the regulatory regimes. As you may know, we don’t have a worldwide recognized law system that recognizes the electronic transfer of documents. That’s one of the reasons why we still have bills of lading that are transported all over the world, but in general we are of course pleased that standards and data standards are being discussed also at a governmental level.

We are actively engaging in the conversations both with the US ports and more, but also with the Federal Maritime Commission, Department of Commerce and Transport in the US.

SFR: Have many ports confirmed that they’ll accept the standards and agreed to work together with these standards, especially on the just in time, port call activities..??

TB : Absolutely. But that’s a journey to be quite honest. What we do right now is we work with a series of ports and have set them up in sequences. Our pace is set according to the pace that our members are willing to support us on. Because it is first and foremost their investments that are carrying the work that we do. We work with the Port of Singapore, Port of Valencia, Rotterdam, Hamburg currently. I think for 2022, there are eight more ports being added to that. So, we’ll get to a total of 12 by the end of 2022.

The more encouraging part is the work with the terminal operators and the port authorities because there’s plenty more that are asking and sort of opening their eyes and seeing how they can become part of this initiative. But obviously it will take quite a long while to get everybody on the standards.

But I do think that ultimately, what is required is that we need a number of first movers and ports and terminal operators that are willing to experiment, that are willing to try out new things because what we’ve come up with is not perfect yet. It will only be perfect when we really collaborate and work together on it.

SFR: You mentioned about regulator and regulatory functions.. Do you think that down the line DCSA’s standards could become mandatory for the benefit of the industry, and it will in some way become a regulatory requirement whether it is for the port or customers or customs as you mentioned..??

TB: Personally, I am a free marketer, so I hope not. That’s not to say that in certain industries, utilities are a great example, you need to have more regulatory control, but I  hope it won’t be necessary for us to have mandated standards. I think the industry will be better off by collaborating on these standards and assuring regulators that we can come up with them. We can adopt standards and show customers that we can help alleviate some of the supply chain challenges that are currently present in the world.

SFR: Before we wrap up, do you have anything that you would like to say from a DCSA perspective to the industry, and to those listeners/readers..??

TB: I think that it’s very fundamental that we all become part of the change that we want to see. I’d ask companies and people that are willing to try out new things to get involved and to reach out. Because as they say “the longest journey starts with the first step” and we need involvement. We can’t just sit around and be dissatisfied with the way things are without contributing to the solution. I encourage anyone, whether it is ports or terminal operators, shippers, freight forwarders, technology service providers, regulators, anybody that’s watching or reading this, and wants to be part of this to reach out and help us create some data standards and more efficient, effective supply chains.