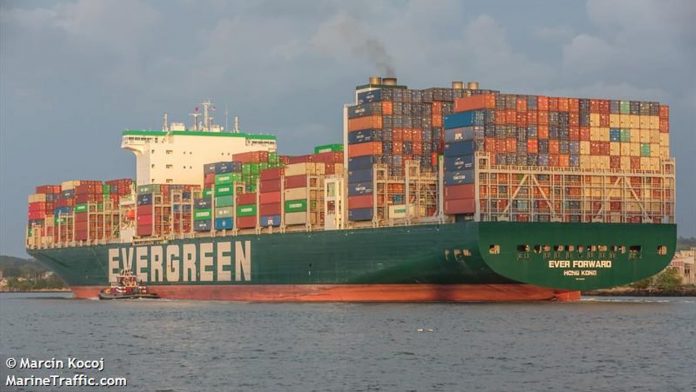 As reported previously, the Ever Forward, a Hong Kong flagged ship operated by Evergreen, the 7th largest container shipping line in the world, was on its way from the port of Baltimore in Maryland US to Norfolk when it is said to have missed a southbound turn in the Chesapeake Bay and ran aground (resting at the bottom) around 00:15 hrs (UTC) on the 13th of March 2022 near Gibson Island in the Chesapeake Bay channel.

Efforts by authorities to free the ship have been unsuccessful so far with the last attempt on Tuesday the 30th of March involving 5 tugs – two pulling on the starboard side, two pushing on the port side and one long pull from the stern.

William Doyle, Executive Director of Port of Baltimore announced previously that a second attempt will be made in the coming days using two anchored pulling barges from the stern and five tugs.

That “coming days” seems to be the 6th of April 2022. In a tweet, William Doyle shares the plan for the salvage operations of the Ever Forward.

The US Coast Guard said “salvage experts determined they can’t overcome the ground force of the Ever Forward in its current loaded condition. Once the containers are removed, crews will again try to refloat the ship.”

The barges will reportedly ferry the containers to Seagirt Marine Terminal in Baltimore after which the tugs and pull barges will attempt refloating operations of the Ever Forward.

The US Coast Guard expects the operation to take about two weeks, depending on various conditions including the weather and smooth offloading of the containers.

Hopefully, the Ever Forward will be freed on this attempt and carry on in its journey.