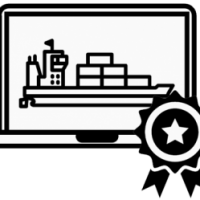 A Standard may be defined as a repeatable, documented and harmonized method of doing something, whether it relates to the manufacturing of an item or managing a process, quality of material etc..

Standards contain technical and documentary specifications or other information required to be used consistently as a rule, guideline, or definition..

Why are Standards necessary..??

Well, to put it in very simple terms, Standards are necessary so everyone around the world maintains and follows the same codes, dimensions, measurements, safety methods etc and not do their own thing..

Containerisation facilitated the spread of globalisation and that would not have been possible without the setting of standards for containers by the ISO..

Imagine if each shipping line or container operator followed their own specifications without adhering to the ISO Standards set for the industry.. A unified shipping approach would have been impossible..

Through the use of ISO standards, the container size/types used can be quickly identified..

As the industry progressed, digitalisation came into play and we are currently in the realm of the much touted 4IR which includes various technological and digital developments such as Blockchain, Smart Containers, IoT, Big Data, Artificial Intelligence, Autonomous vehicles and ships, Drones etc etc etc..

Shipping is an industry that is currently deep in the process of digital innovation and enabling.. Several digital initiatives are being driven simultaneously by several groupings within the industry..

Digital Freight Forwarders with their freight platforms and online systems are taking over the forwarding space threatening to take away business from traditional freight forwarders..

Smart container devices are being installed in containers converting entire fleets of static containers to dynamic smart containers with the facility to provide real time tracking providing more and more visibility to everyone..

Not to be left behind, shipping lines are also working on converting themselves into Digital Shipping lines with many shipping lines innovating their services and systems to suit the modern markets..

Digital Container Association a grouping of 9 shipping lines – Maersk, MSC, ONE, Hapag Lloyd, CMA CGM, Evergreen, HMM, Yang Ming Line and Zim Shipping was set up to help the industry to choose shared information technology standards that relates to transmitting, receiving and exchanging data across the industry.. The ultimate objective is the creation of a framework for standardizing data, message formats and interface specifications..

One thing that has been missing is the STANDARDS for all these digital services, but it seems that is also being addressed and Digital Standards are on the way..

In August 2019, Digital Container Association released the first Container Shipping Industry Blueprint consisting of recommended current standards for the processes used in container shipping from the view of the carriers..

As per DCSA, the objective is for carriers to start using this standard and adhere to it when implementing digitalisation and standardisation initiatives in the industry going forward..

The blueprint has been developed by DCSA in conjunction with its founding members – Maersk, CMA-CGM, Hapag-Lloyd, MSC and ONE.. The blueprint maps processes commonly used in container shipping from Carrier Booking to Container Return to create a common view across the industry..

This blueprint is said to be a live document and will be updated on a regular basis..

In September 2019, Traxens announced that it has led the development of the first standards for smart container data exchange published by the United Nations Centre for Trade Facilitation and Electronic Business (UN/CEFACT)..

As per Traxens, this ‘Smart Containers BRS’ project aims to provide clear global standards for the exchange of data to ensure interoperability and easy integration within different systems.. In line with this, data will be generated once and shared between multiple stakeholders, platforms and systems; improving data exchange, automated workflow and alert generation..

As per Jacques Delort, managing director of Traxens, “This technology can be combined with other innovations such as blockchain, big data or data pipelines to provide even more uses in the trading community. In all of these cases, though, we see that creating clear, unambiguous message exchange standards will unlock the further potential of enhanced data”..

“Thanks to smart containers standardized messages, the computer representation of the supply chain will become synchronized with the physical world, increasing the speed and accuracy of decision-making, the automation as part of transport and logistics execution and the seamless collaboration between stakeholders. Enhanced data will improve visibility and predictability for stakeholders as well as for regulatory agencies who need detailed information on consignments before they arrive at the border,” adds Hanane Becha, innovation & standards senior manager at Traxens..

“We are proud to pave the way to better data integration and advanced smart container services by bringing the shipping industry together around a common standard. says Mathieu Friedberg, Senior Vice President – Commercial & Agencies Network, CMA CGM Group. Such standardized solutions are key to advance digitalization and to seize all the opportunities offered by smart containers.”

The ISO has created a Standard for Blockchain and distributed ledger technologies (ISO/TR 23455:2019) which provides an overview of smart contracts in BC/DLT systems; describing what smart contracts are and how they work..

It also discusses methods of interaction between multiple smart contracts and the technical aspects of smart contracts.. Smart contracts for legally binding use and applications will only be briefly mentioned in this document.

The creation of these digital standards by DCSA, Traxens and ISO may spur others involved in the digitalisation of the industry to follow suit and this will be of immense benefit to all stakeholders and role players involved in global trade..

Imagine a shipping and freight world where everyone follows a set standard and people know what to expect..

3 thoughts on “Digital Standards for the shipping industry”