All about Dangerous Goods segregation

Hazardous cargo, Dangerous Goods, DG, IMCO Cargo – it is known by many names in the industry..

There also have been several articles on this blog about Hazardous cargo..

But something that still confuses several people involved in shipping and freight is how the SEGREGATION of Dangerous Goods works..

Dangerous goods are incompatible to each other in case they react dangerously when they come in contact due to leakage or spillage, or any other accident or increase the intensity of fire or explode if they burn together.

Interpreting segregation provisions of IMDG Code may seem complicated and there are chances one may miss a step or two ending up offering containers packed with incompatible goods for loading on board vessel. A vessel carrying incompatible goods in same container becomes an unsafe vessel and may result in serious consequences such as explosion, fire or loss of lives.

How do we ensure that incompatible goods are not packed or stowed together?

For checking segregation between dangerous goods in packaged form there are;

2.   Segregation Rules in column 16b of IMDG Code

c)    “Separated by a complete compartment or hold from”;

d)   “Separated longitudinally by an intervening complete compartment or hold from”. 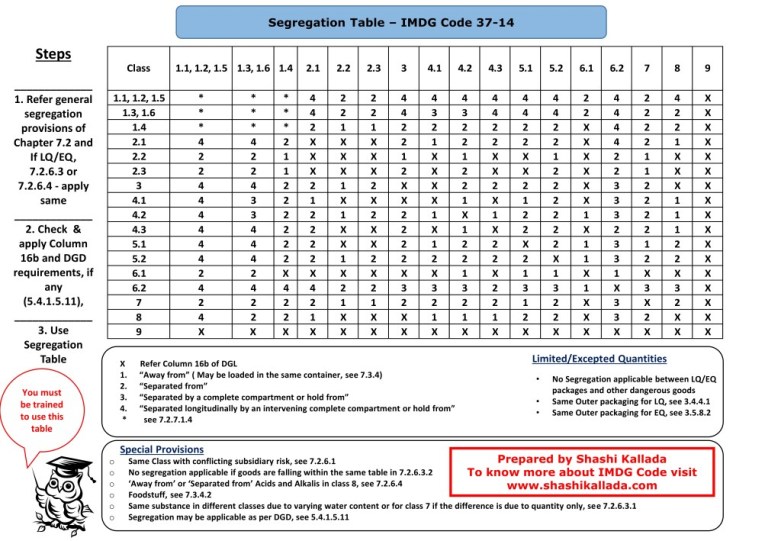 Let us check segregation between certain dangerous goods and reach the conclusion taking above three steps which may lead to further steps to achieve compliance to segregation requirements.

Conclusion = Both may be packed in same container or stowed together

Conclusion = UN 1467 which must be separated from chlorates hence cannot be loaded with UN 1485 Potassium Chlorate.

However general segregation provision in section 7.2.6.3.1 exempt the requirement of segregation table between dangerous goods of different classes which comprise the same substance but vary only in their water content hence both UN 1385 and UN 1849 may be loaded in same container.

Segregation on board Container ships

While loading containers on ships stowage planners ashore will plan the positions in such a way that segregation between containers are maintained this will be further checked by Mate.

For example, if there are two 20 ft boxes each containing goods as below

Intersecting column of Segregation table between Classes 3 and 5.1 reads “2” which means these goods must be separated from each other.

On containerships with closed cargo holds segregation between containers carrying classes 3 and 5.1 need to be in accordance with section 7.4.3.2 which is further illustrated in Maritime Safety Committee circular no. MSC.1/Circ.1440 as shown in below illustration 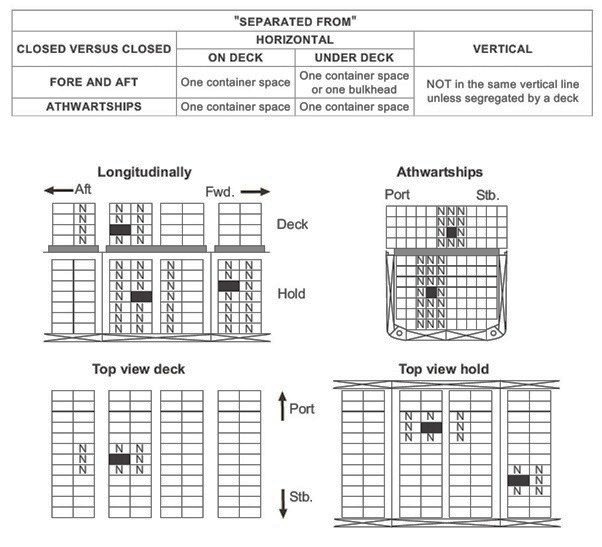 Previous articleSOLAS VGM Method 2 – How it works in South Africa
Next articleTo Tare or not to Tare – Should the VGM match the Bill of Lading Weight..??
RELATED ARTICLES
Education

CAPT Rayomand Shroff on Evergreen gets double certified for its Greenhouse Gas emission inventory
Roberto Muehlenkamp on Beware of fake shipping line websites for tracking your cargo
Suzy on Free knowledge sessions for Women in Shipping and Freight Industry
Duoly on Difference between ICD, On Dock CY and Off Dock CY
Raks International on Shipping lines will accept responsibility for their mistakes – True or False..??

Evergreen gets double certified for its Greenhouse Gas emission inventory