Container weight misdeclaration has been the scourge of shipping lines, truckers and ports for many years..

Hopefully below synopsis will open everyone’s eyes to its dangers..

Will the SOLAS VGM REGULATION coming into effect from the 1st of July 2016 make a difference and wipe out container weight misdeclaration..??

Only time will tell.. 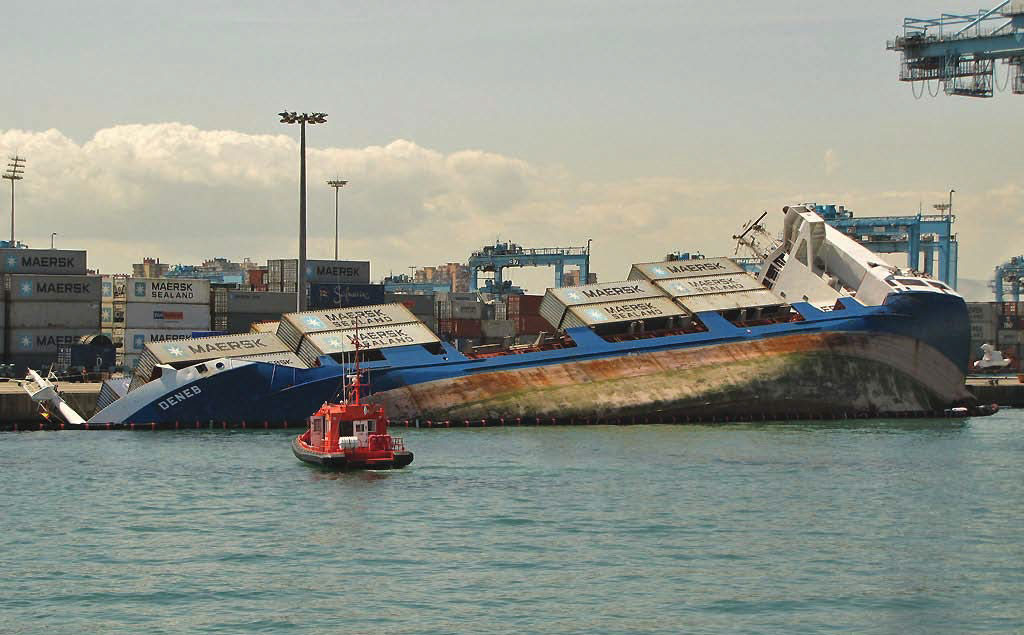 January 2007: MSC Napoli: “About 660 containers stowed on deck, which had remained dry, were also weighed. The weights of 137 (20%) of these containers were more than 3 tonnes different from their declared weights. The largest difference was 20 tonnes, and the total weight of the 137 containers was 312 tonnes heavier than on the cargo manifest” (Source: “Report on the investigation of the structural failure of MSC Napoli”, U.K. Marine Accident Investigation Branch, Report 9/208, April 2008, p.28). 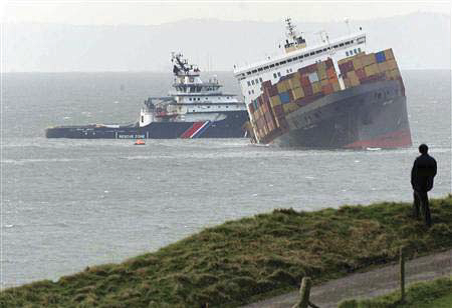 “The container that fell 12 meters and narrowly missed two workers was severely overloaded and the third accident this month at Darwin Port. Two workers at the Darwin Port had to run to avoid a shipping container crashing onto East Arm Wharf at the weekend, the Maritime Union of Australia says. The container was listed as four tones, but the Maritime Union says it weighed 28 tonnes and exceeded the crane’s load limit.” 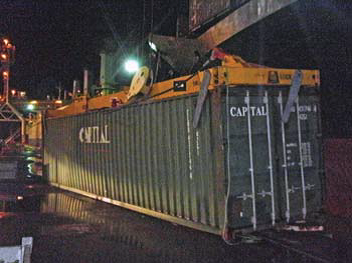 May 9, 2011: ABC News Melbourne: An overloaded forklift lies in a container yard in west Melbourne after its load tipped it forward, May 9, 2011. Story from May 10. 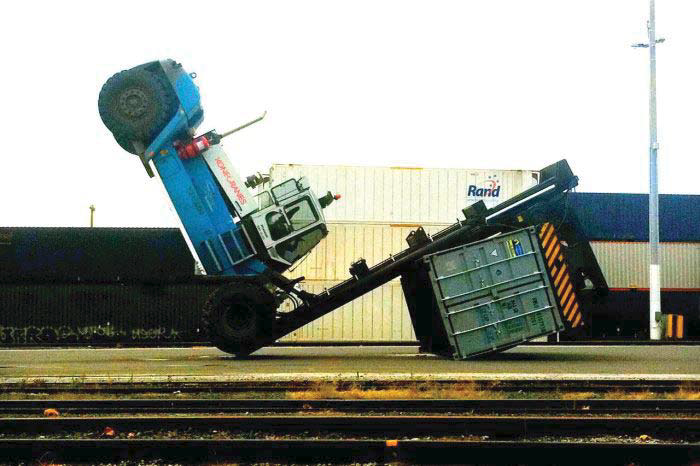 February 2007: Container ship MV Limari in Damietta: Container stack collapsed due to stack overweight. The master’s incident report to the authorities notes that: “Excessively heavy units loaded in the upper tiers and that the maximum stack weight had been exceeded considerably in some rows. The effect of the overweight units was to impose excessive forces on the lashings. Further, exceeding permissible weight distribution and/or exceeding the maximum stack weight in any stack, results in overstressed stowage/securing elements and overstressed containers”. The actual container weights were established by the devices on the gantry crane when lifting and shifting the collapsed containers. The actual container weights exceeded the declared weights by 362% (Row 08), 393% (Row 06), 407% (Row 04) and 209% (Row 02) in Bay 52 where the collapse occurred. 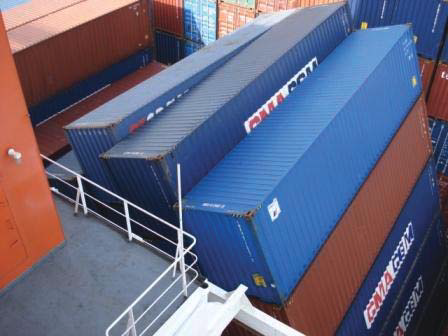 March 2011: Excerpt from the publication “Container carriage. A selection of articles previously published by Gard AS”:

“Two recent cases which Gard Services has been involved with have certain similarities. Both cases involved heavy weather and the collapse of an on-deck container stack in way of the bottom container. In each case, the bottom container was of questionable fitness in terms of structural integrity. However, that was not the only factor. In each case the weight of certain containers within the stack was found to be in excess of the manifested weight. In one case, four containers (forty foot units) in the collapsed stack were found to have 18 MT or more undeclared cargo, which even resulted in the maximum operating gross weight for each container being exceeded”. (The Gard publication was accessed on December 6, 2012, at: http://www.gard.no/ikbViewer/page/sharing-knowledge/allpublications). 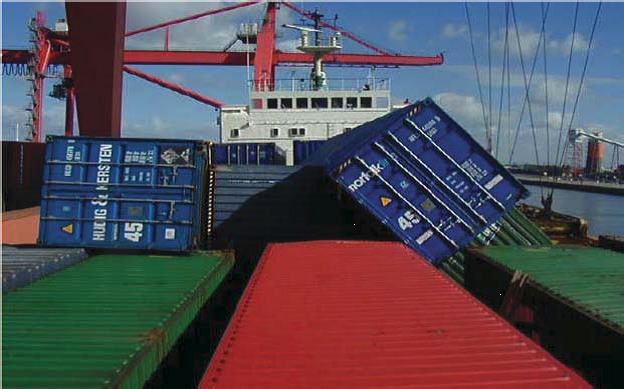 “The declared weight of a container provided by the shipper and used for all stow planning and onboard stability purposes can, if inaccurate, cause major discrepancies between actual and declared weights. Furthermore, incorrect weight can result in stack overload and the application of excessive compression and racking forces on containers and their lashings. Although there are no financial gains to be made by the shipper who declares less than actual weight, the industry acknowledges that over-weight containers are a problem. However, as yet this has not justified a requirement for compulsory weighing of containers prior to loading” (Source: “Report on the investigation of the loss of containers overboard from P&O Nedlloyd Genoa”, U.K. Marine Accident Investigation Branch, Report 20/2006, August 2006, pages 19, 30 and 31) 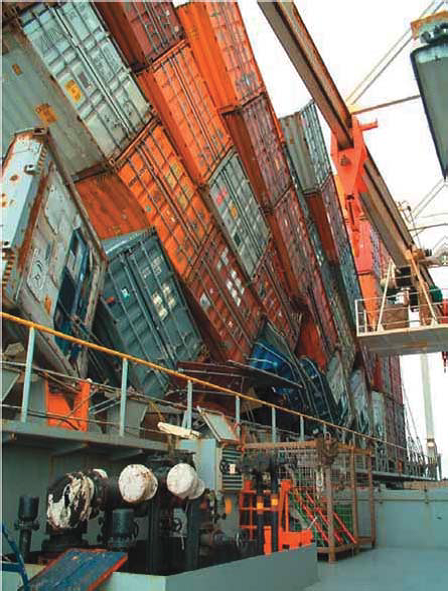 2011: Mariners’ Alerting and Reporting Scheme (MARS): Hazards of underdeclared cargo weights: “A large container vessel was loading at the final load port before  commencing a trans-ocean voyage. The exit channel from the terminal had a draught restriction and sailing was subject to a narrow tidal window. Pre-arrival loading information listed some 350 containers, most of them going on the deck stacks. Being a regular vessel at the port, the terminal’s computer system provided a departure stability condition with the sailing draughts allowing for adequate underkeel clearance (UKC) as per company’s SMS. However, during the latter half of the 12-hour loading period, the chief officer realised that there was substantial under-declaration in the manifested container weights (later estimated to be an average of 12 per cent). This meant that after loading the manifested boxes, the ship was in serious danger of grounding in the channel. Thanks to quick thinking by the master, a total of about 850 tonnes of ballast was discharged before sailing from the twin autoheeling tanks, which due to their high location and narrow width resulted in a safe even-keel trim and an acceptable stability condition. The ballast was restored in the heeling tanks after reaching deep waters but unfortunately, it was realised after sailing that stack-weight limits had been exceeded in many deck stacks.” (MARS 2011 was accessed on December 7, 2011, at: http://www.nautinst.org/en/forums/mars/mars-2011.cfm/Hazards%20of%20underdeclared% 20cargo%20weights).

Above synopsis (originally published on this blog on the 3rd of October 2012) was reproduced from Madden Maritime..

17 thoughts on “Consequences of container weight misdeclaration – a pictorial”