Carrier on-time performance suffers due to lack of schedule reliability 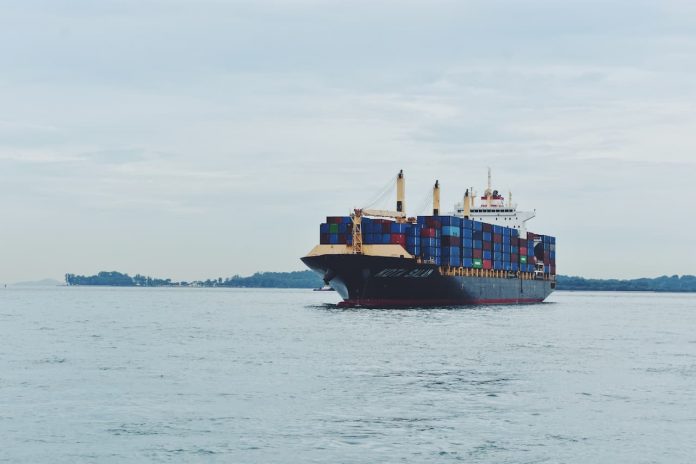 Announcing the new leader, Alphaliner stated “For a period of some weeks, the capacity gap between MSC and Maersk Group is expected to remain tight, so that daily fleet fluctuations from charter on-hires and off hires could, theoretically, see Maersk Group move ahead again for short periods of time. MSC is however expected to become a permanent number one in the first half of 2022 when numerous large new-build container ships are scheduled to be delivered to the carrier.“

Yet, according to project44 intelligence, congestion and delays on the main Trans-Pacific and Asia-Europe routes further reduced the available nominal TEU capacity. In fact, there was a 23.35% drop from the 2021 monthly average to Jan 2022. 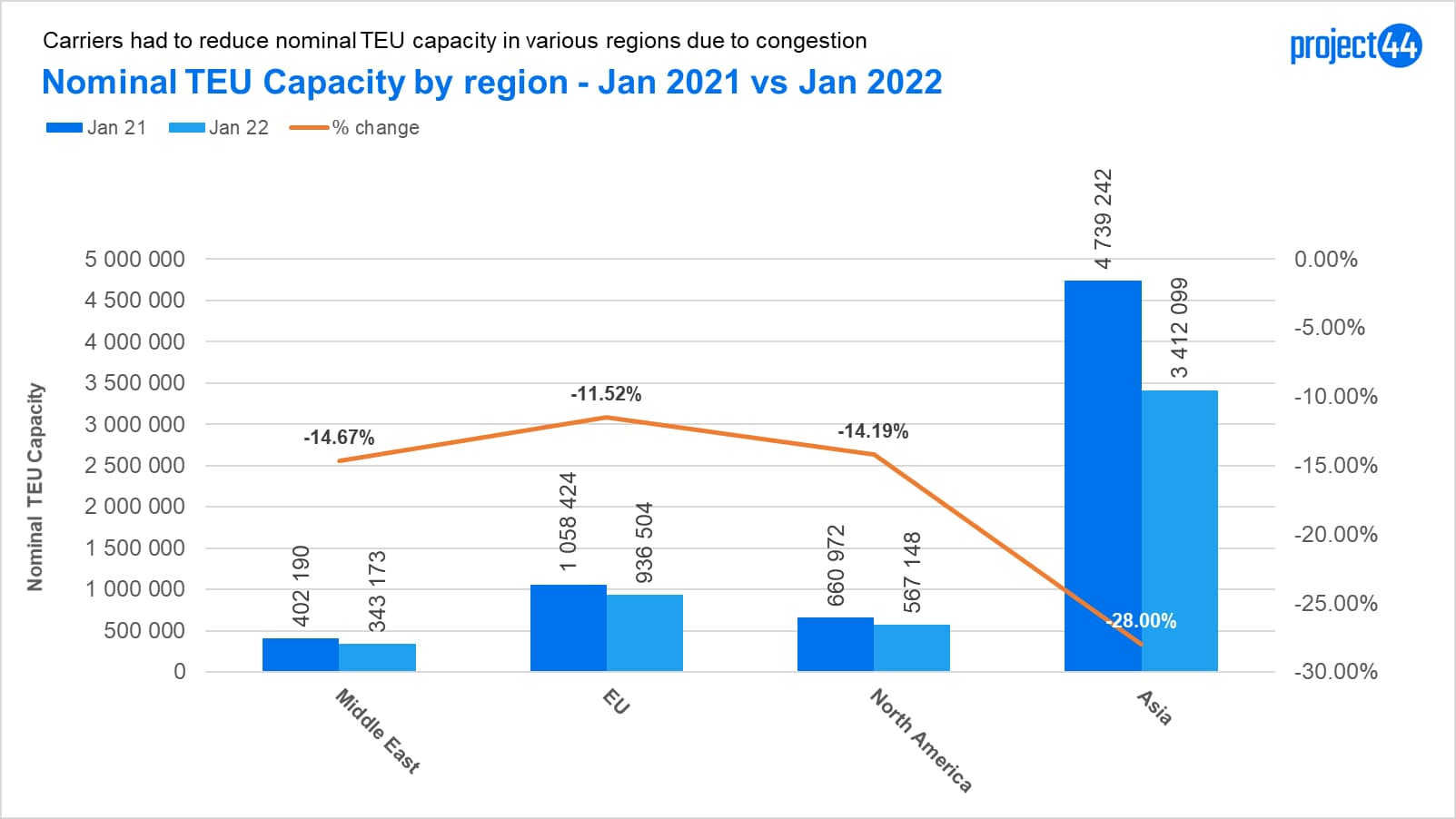 In January 2022, this figure increased marginally with carriers shipping 23.4% full exports from Los Angeles and 31.6% from Long Beach.

On the China/Europe route, carriers’ on-time performance in terms of schedule reliability continued to suffer, with the average days deviation from the original schedule increasing in January 2022 to an average of 8.35 days. This is an increase of almost 5 days since November 2021. 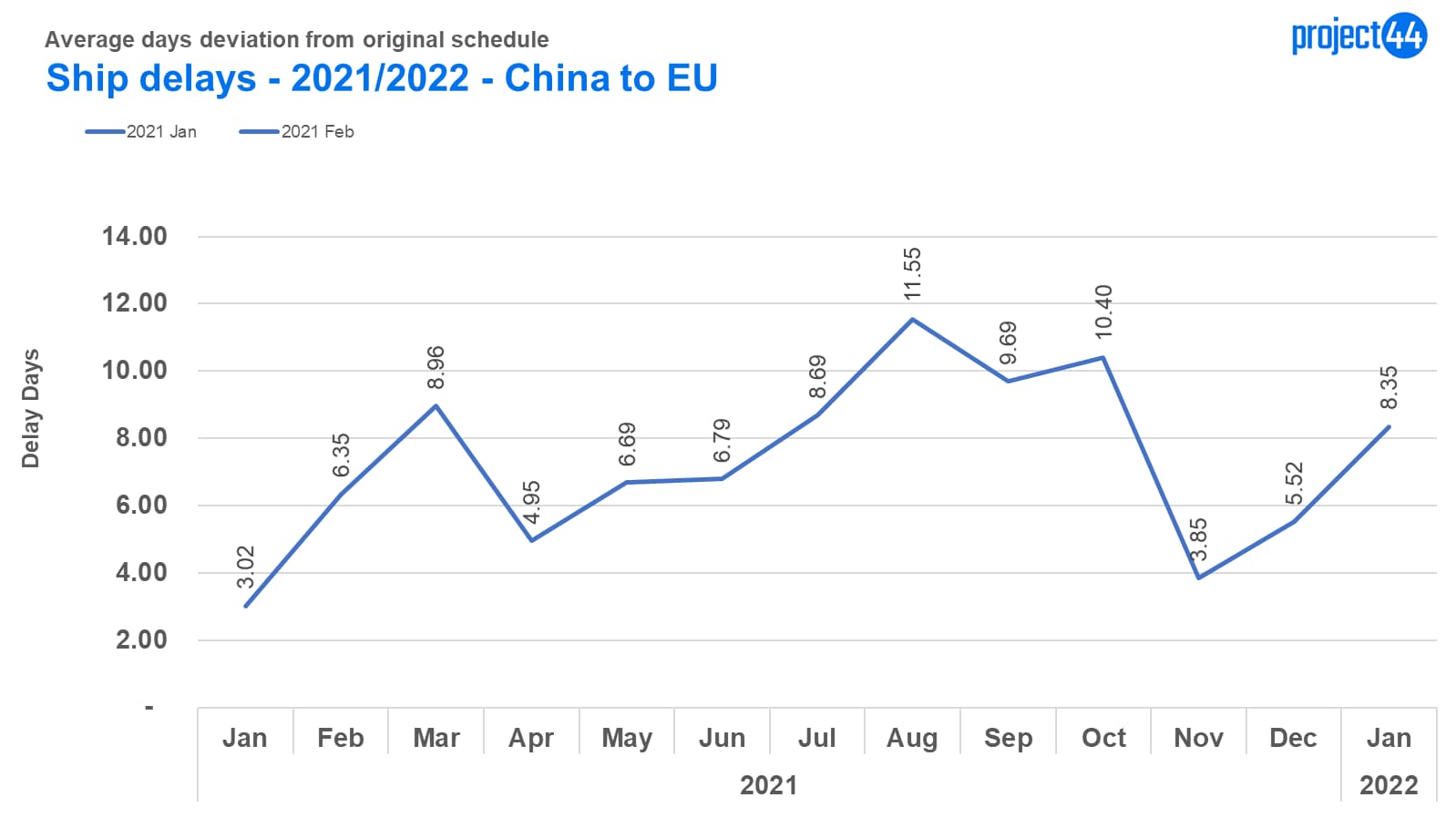 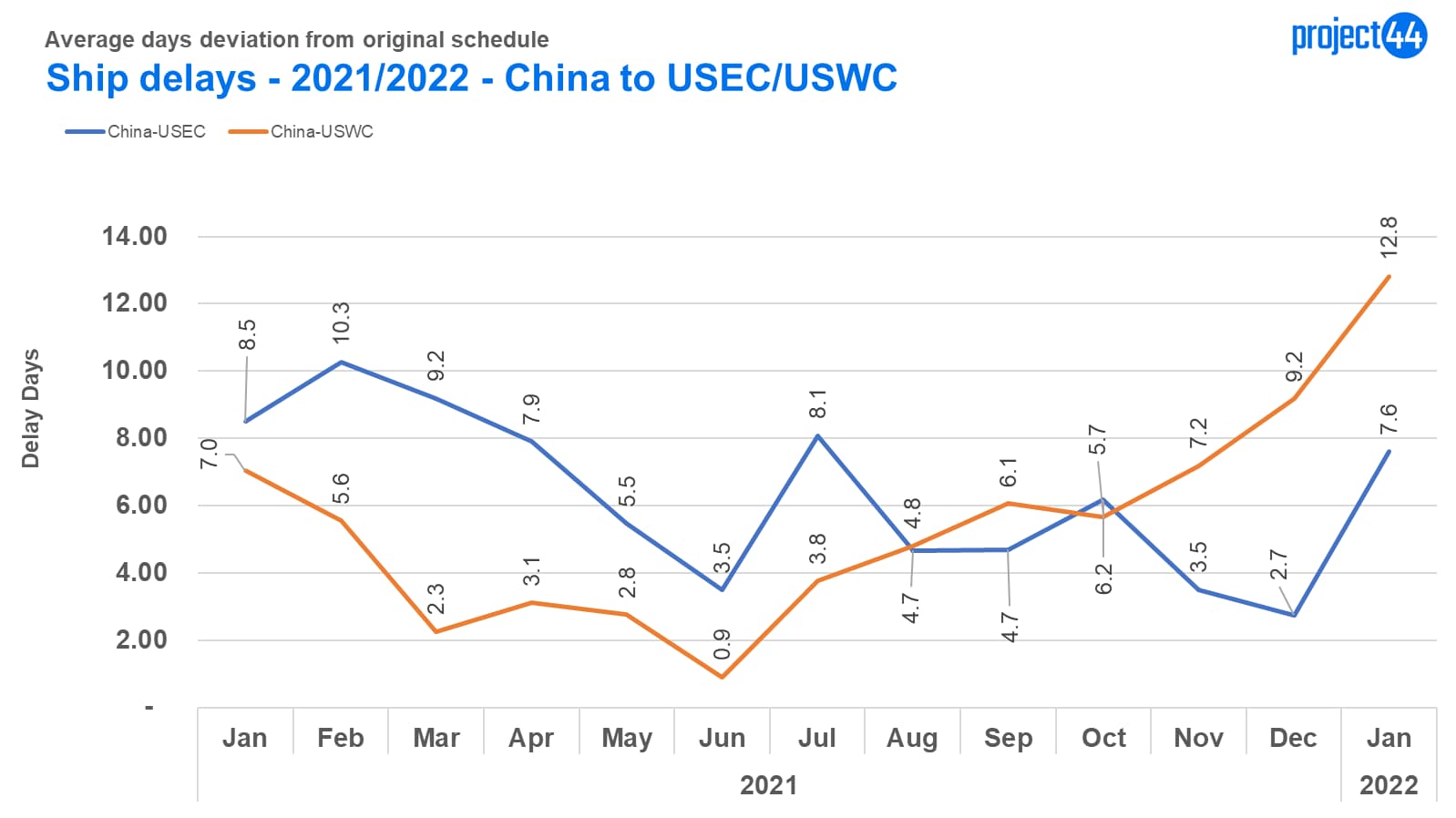 “As the recurring cycle of vessel delays continues and port congestion negatively impacts transit times, the cost for moving goods around the world is still rising,” said Josh Brazil, Director of Supply Chain Insights at project44

Although there was no change in January spot rates from the various carriers for the Shanghai to Long Beach route, carriers’ on-time performance declined even further due to lack of schedule reliability, reaching 12.2 days of delays in January 2022, compared to 8.4 days in December 2021 and 5.3 days in November 2021.

According to Bloomberg, the Omicron variant of COVID-19 spread quickly through dockworkers at Long Beach in January. Positive infections among Longshore and Warehouses Union workers at US West Coast ports reached 1,878 through January 28. About 80% of January’s reported infections were at Los Angeles and Long Beach, according to the Pacific Maritime Association (PMA). 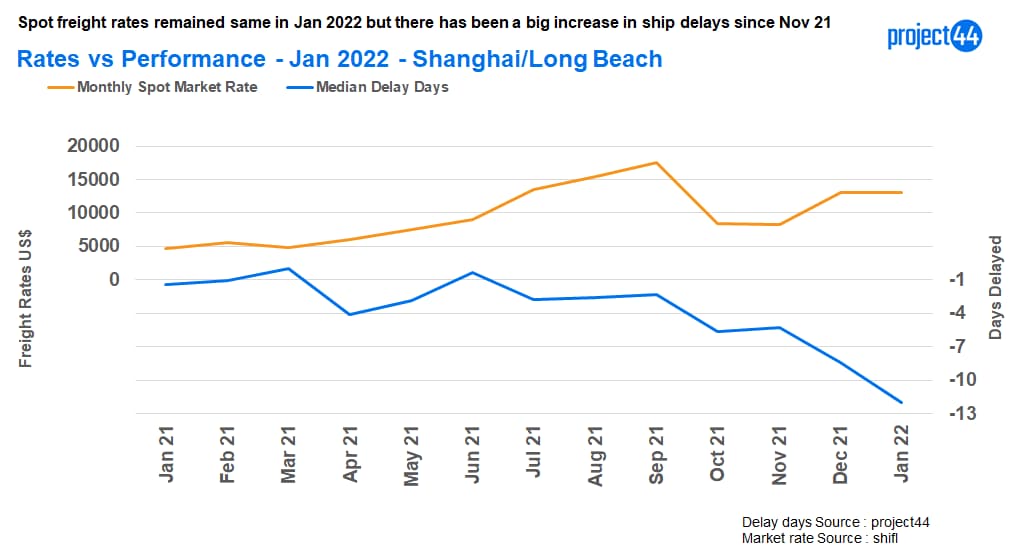 “Despite little to no increase in spot rates from December to January, carriers’ on-time performance plunged further in January as  COVID-19’s Omicron variant spread among port workers from Long Beach and Los Angeles and New York/New Jersey,” added Brazil

A late December surge in imports along with end-of-year holidays and an outbreak of the Omicron variant among the workforce at the port of New York and New Jersey caused a backup for carriers in early January. In addition, a one-day port closure due to inclement weather during January also resulted in backups. As a result, delays increased by more than a staggering nine days from 3.4 days in December to 12.6 days in January while spot rates remained the same as in December. 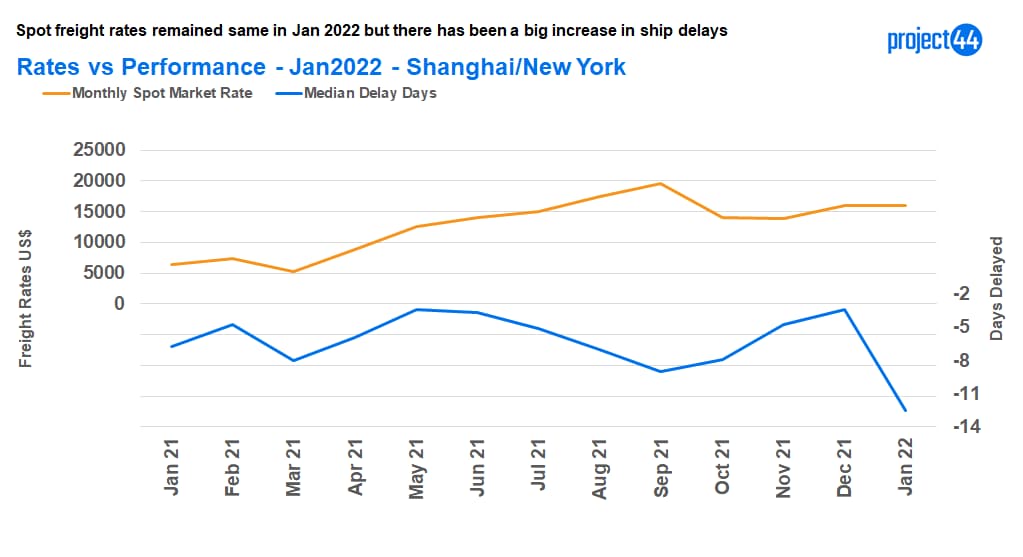 The only origin region to note improvement in shipment delays in January was the Middle East. Shipment delays peaked in September at almost 12 days. Since September, however, the number of shipment delay days has fallen to almost 6.3 days. 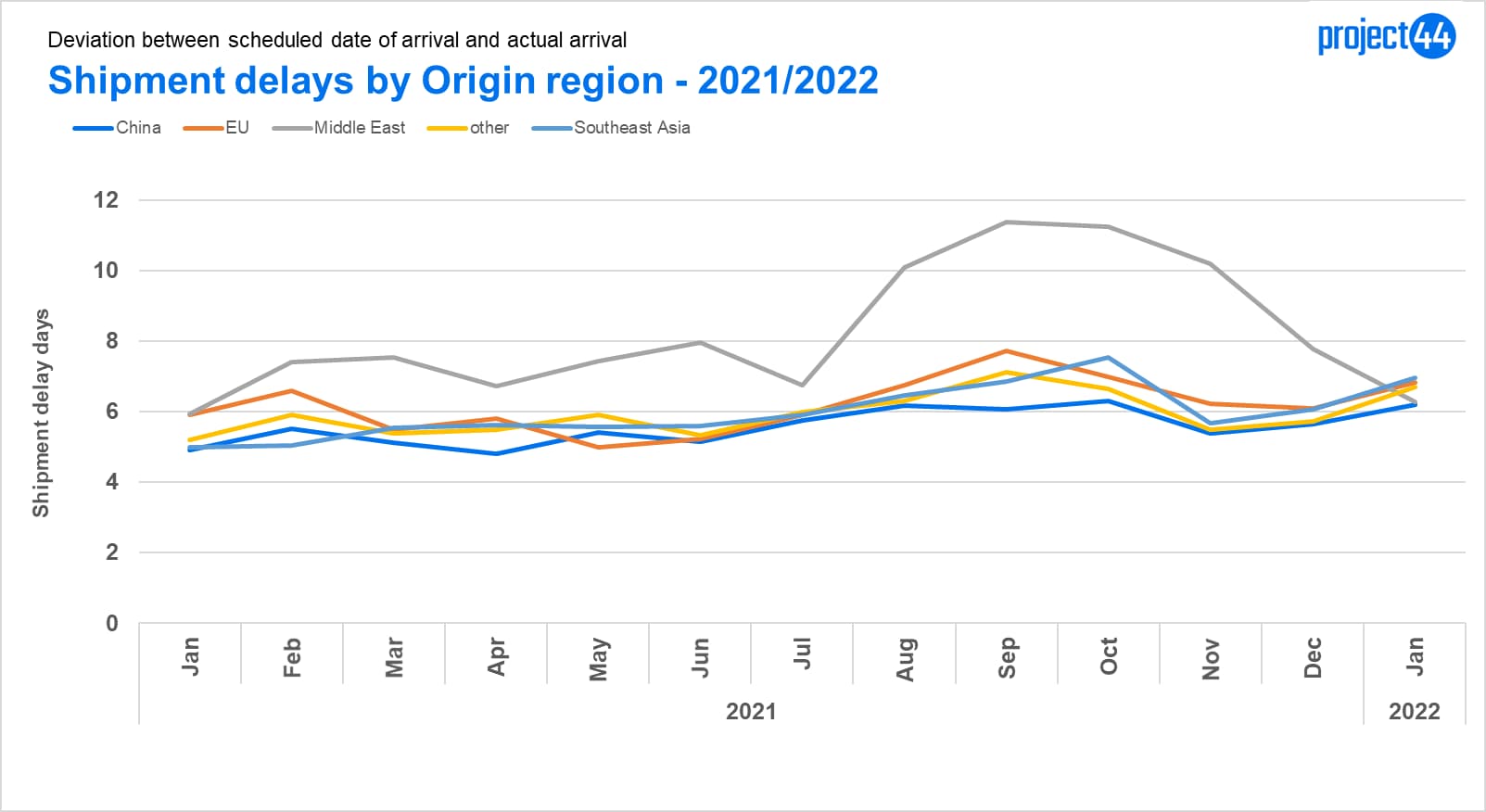 Meanwhile, the US West Coast as the destination was the only region to note a slight decline in January dropping from 8.5 in December 2021 to 8.3 in January 2022. 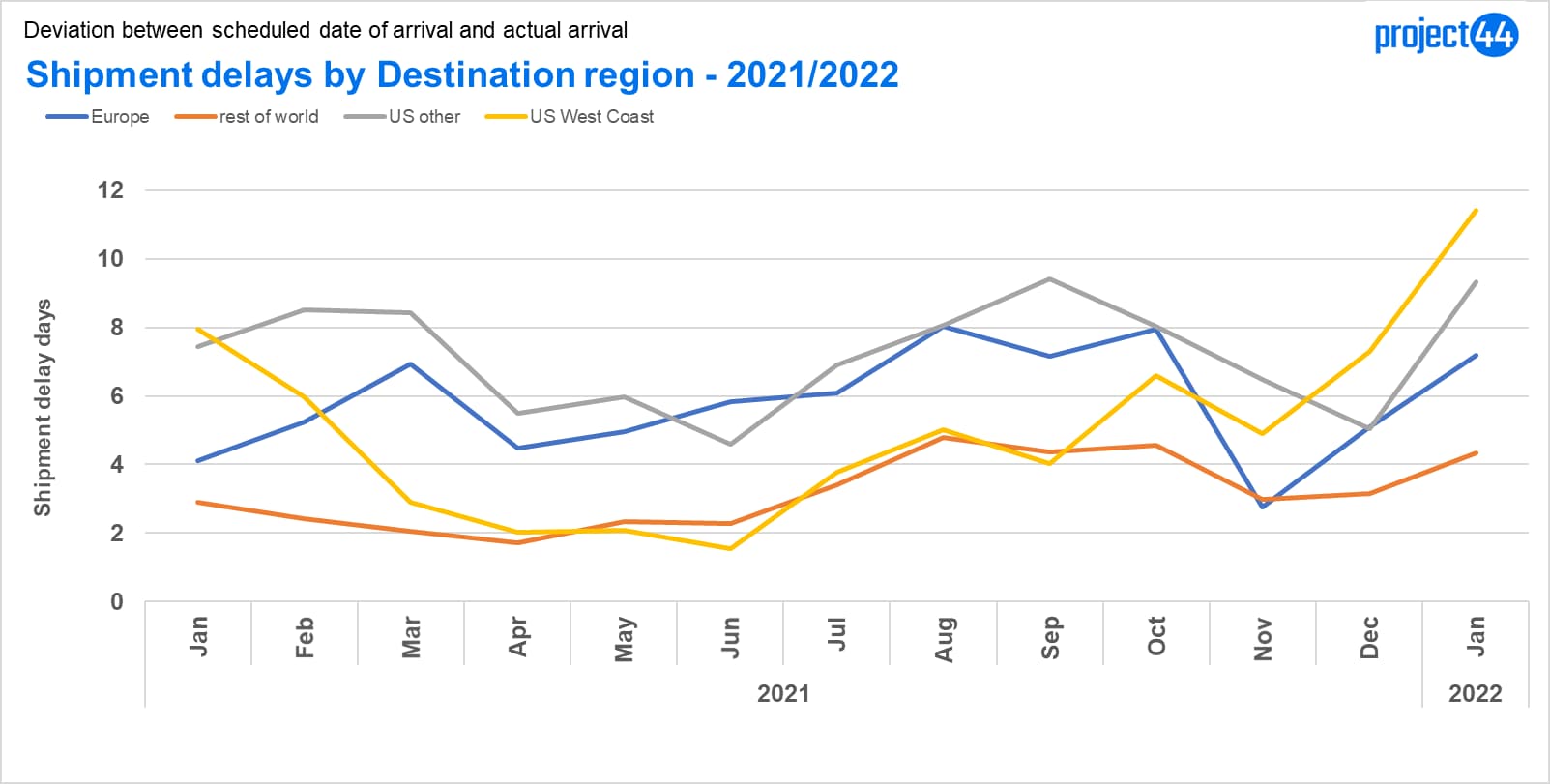 Carriers brought in and took out a record 865,595 TEUs in January at the Port of Los Angeles, a 3.6% volume increase compared to last year. Commenting on the record month, Port of Los Angeles Executive Director Gene Seroka said, “Many of the key data points that track the number of containers moving off our docks, and how quickly they depart, have improved significantly in recent weeks. Our record-breaking January reflects the great efforts of our longshore workers, truckers, and terminal operators as we continue to focus on additional operational efficiencies in the months ahead.”

The Port of Long Beach also saw its busiest January on record, with a 4.8% increase from the same month last year. “Terminal capacity is finally opening up thanks to support from our federal and state leadership, collaboration with industry partners, and the hard work of the men and women moving record amounts of cargo off the docks,” Port of Long Beach Executive Director Mario Cordero said. “We expect to remain moderately busy into the spring as we make significant progress to clear the docks and process the backlog of vessels waiting offshore.”

Average transit days from Chinese ports Ningbo, Qingdao, Shanghai and Yantian to Los Angeles and Long Beach increased in 2022 compared to previous years. Strong growth in consumer spending led to shippers booking record shipments from China to replenish inventories to keep up with consumer demand. However, the rise in US consumer demand for goods, COVID outbreaks throughout Chinese and US supply chains and congestion at Los Angeles and Long Beach led to longer transit times.

“A potential lull due to the Lunar New Year holidays is expected but we believe that March will be busy as retailers replenish seasonal inventories.” said Brazil

At first glance, February looks to be a slower month compared to January as carriers prepare for the reopening of Asian manufacturing facilities from the Lunar New Year holidays. The Wall Street Journal reported on February 10 that the backup of container ships waiting to unload in Southern California is shrinking with the number of ships waiting to enter the ports of Los Angeles and Long Beach at the smallest it has been since November 11.

However, Gene Seroka, executive director of the Port of Los Angeles, said “No one is taking a victory lap.”

Indeed, a quiet February could just be a prelude to a busy March. Stronger than expected US retail sales in January along with low retail inventories will likely keep Asian manufacturers, ports, and carriers busy for the next few months.

After ending 2021 on a high note, unadjusted US retail sales in January increased 10.9% year-over-year. Meanwhile, retail inventories ended December, the latest available data, with a 4.2% month-to-month increase and a 3.7% increase year-over-year. December retail sales slipped from November resulting in an inventory-to-sales ratio of 1.16, an increase from November’s 1.08 but still lower compared to January 2020 when the ratio was 1.28.

Maersk anticipates ocean freight growth to continue in 2022. According to its 2021 Annual Report, Maersk’s Ocean group is expected to grow in line with the global container demand of 2%-4% in 2022, “subject to high uncertainties related to the current congestion, network disruptions, and demand patterns.”

Soren Skou, chief executive officer of Maersk, expects supply-chain bottlenecks to continue at least until June while others expect issues to continue for much longer.  Flavio Macau, an associate professor at Edith Cowan University in Western Australia told UK publication, The Guardian,“My view is that supply chains still have high blood pressure, consistently showing arrhythmia. It will take to mid-2024 to get back to “normal.”

project44 is the world’s leading advanced visibility platform for shippers and logistics service providers as defined by the number of happy customers, number of carriers, number of customers, ARR, net retention, shipments per day, growth rate, and gross margin. project44 connects, automates, and provides visibility into key transportation processes to accelerate insights and shorten the time it takes to turn those insights into actions. Leveraging the power of the project44 cloud-based platform, organizations increase operational efficiencies, reduce costs, improve shipping performance and deliver an exceptional experience to their customers. Connected to thousands of carriers worldwide and having comprehensive coverage for all ELD and telematics devices on the market, project44 supports all transportation modes and shipping types, including Air, Parcel, Final-Mile, Less-than-Truckload, Volume Less-than-Truckload, Groupage, Truckload, Rail, Intermodal and Ocean. In 2021, project44 was named a Leader among Real-Time Transportation Visibility Providers in Gartner’s Magic Quadrant. To learn more, visit www.project44.com.