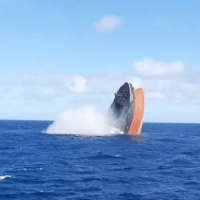 Captain Sunil Kumar Nandeshwar and First Officer, Hitihanillage Subhoda Janendra Tilakaratna of the 203,000 DWT Capesize vessel Wakashio which hit a coral reef and sank off the coast of Mauritius have each been sentenced to 20 months in prison.

The ship owned by Nagashiki Shipping and on charter to Mitsui OSK Lines left China on 14 July 2020, heading for Brazil, but hit a coral reef at Pointe d’Esny, Mauritius on 25 July 2020 spilling oil into the Indian Ocean and eventually sinking in Mauritius.

Captain Nandeshwar and his first officer, Tilakaratna were found guilty under the 2007 Merchant shipping act by a court in the capital, Port Louis for endangering safe navigation which also involved the spilling of about 1,000 tonnes of fuel oil causing Mauritius’ worst ecological disaster. 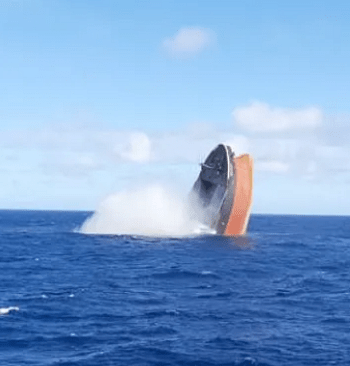 Handing down the sentence, Magistrate Ida Dookhy-Rambarun said the sentences were “fully warranted”, despite the guilty pleas, and the “clean record and personal circumstances” and hoped that the sentence would “serve as a lesson” for the men, and other potential offenders.

Both had pleaded guilty to endangering safe navigation but the first officer, a Sri Lanka national had appealed to the court for leniency and said he had not been able to see his family since his arrest.

The good news for the two seafarers however is that since they have been in custody for nearly 16 months this will go towards their sentence and BBC has reported that as per a prison source the Captain was likely to be released on Tuesday 28th Dec and the First Officer on 15 January.

Mauritius is home to world-renowned coral reefs, and is popular with tourists and Pointe d’Esny is a known sanctuary for rare wildlife as it contains wetlands designated as a site of international importance by the Ramsar convention on wetlands.

It has been reported that while no scientific study on the impact of the spill has been released environmentalists agree that it was the worst oil spill off Mauritius’ coast which involved thousands of volunteers scooping up the oil for days and trying to contain its spread. The oil spill is estimated that it has already damaged about 300m of coral reef and killed many fish.

The livelihoods of several fishermen in the area has been affected by this incident as they are no longer able to catch as many fish as they used to. In the meantime, the ship’s insurers have agreed to compensate about 1,000 fishermen who would each receive about 112,000 Mauritian rupees ($2,580; £1,920) as per the Fisheries Minister of Mauritius Sudheer Maudhoo.