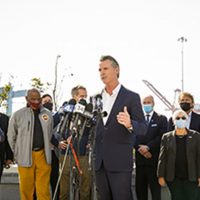 Overlooking the largest container port in the Port of Long Beach, Gov. Newsom outlined recent steps by the state to help unclog the supply chain, such as higher weight limits on trucked cargo and expanding hours for commercial truck driver license examinations. He said the recently signed federal infrastructure bill will bring needed improvements throughout the state’s transportation system.

“Major changes in consumer habits driven by a global pandemic have led to all-time record high volumes of containers moving through Los Angeles and Long Beach ports. Thanks to the collective work of California and our partners, we have seen a 32% drop in containers sitting on the docks,” said Gov. Newsom. “California has taken swift action across the board to address congestion and increase our capacity to move goods quickly. I am grateful for the cooperation of both the public and private sectors – from the federal government, to the ports, the workforce, the retailers, and the shipping lines – for the additional commitments they’ve made to tackle the backlog.”

“We are moving record volumes of cargo using infrastructure built by our parents and in many cases our grandparents,” Porcari said. “The $17 billion allocated for ports and waterways in the Bipartisan Infrastructure Law, in addition to the President’s Port Action Plan, will go a long way towards ensuring goods flow through ports like Long Beach and Los Angeles efficiently.”

“This is an all-hands moment for the ports of Long Beach and Los Angeles,” said Long Beach Mayor Robert Garcia. “With the support of the Biden and Newsom administrations, we are working as one to address the shipping backlog by assisting our supply chain partners wherever we can.”

“The fact that we had the U.S. port envoy and the governor here to discuss the solutions to the supply chain crisis is significant,” said Mario Cordero, Port of Long Beach Executive Director. “I’m excited about the conversation and the progress we are making. This is the largest port complex in the nation and we have the full attention of our state and federal partners.”

Newsom and Porcari, along with state and local officials, gathered Wednesday at Total Terminals International’s container terminal at Pier T. TTI was the first terminal in San Pedro Bay to pilot 24/7 operations, starting in September, by adding a third shift from 3-7 a.m.

Also, the Port of Long Beach and the Port of Los Angeles have each committed to a new container dwell fee directed at ocean carriers beginning Nov. 22. The goal of the fee is to clear out the longest-staying containers at local terminals and thus free up space to help unload ships faster. Since the fee was announced, the twin ports have seen a decline of nearly 30% combined in old cargo on the docks.

The Port of Long Beach is one of the world’s premier seaports, a gateway for trans­-Pacific trade and a trailblazer in goods movement and environmental stewardship. With 175 shipping lines connecting Long Beach to 217 seaports, the Port handles $200 billion in trade annually, supporting more than 575,000 Southern California jobs.