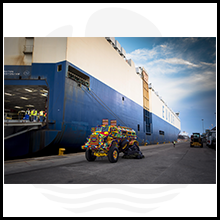 Below is an interesting news item from Transnet about Anti-Apartheid artwork that was sent from South Africa to United States of America..

The start of March 2018 was an exciting one for Transnet Port Terminals (TPT) which saw the Durban Ro-Ro Terminal handle ‘famous’ cargo, SPOEK 1, a restored and refitted Casspir MKII Armoured Vehicle, that in its own right is the first of its kind.

The Casspir’s surfaces are fully covered by brightly-coloured panels of glass beads arrayed in traditional patterns made by artisans from Zimbabwe and the Mpumalanga province of South Africa. The artwork is the creation of Los-Angeles-based, South African artist and film director, Ralph Ziman.

The vehicle is the central element of his multifaceted artwork project, The Casspir Project, that also includes photography, oral history and a documentary film.

The Casspir itself is synonymous with the heavy hand of apartheid oppression in the townships and urban areas of South Africa. While designed originally as a military vehicle, it was used extensively against civilian populations in the 1980’s. With SPOEK 1 (and the larger The Casspir Project), Ziman, sets out to confront the past and start a dialogue on where we are going.

SPOEK 1 was unveiled in December 2016 at the Iziko South African National Gallery, and has since been exhibited and viewed by thousands across the country. The next leg of this historically controversial military vehicle’s tour has commenced with the unusual cargo having departed from Durban on 2nd of March to continue to New York City where it will be exhibited to the public in early May as part of the 1-54 Contemporary African Art Fair, held in the city.

TPT was tasked with the careful handling of the very large and unique Casspir armoured vehicle onto the Morning Lynn Voy.086 vessel for the United States. According to Amanda Siyengo, TPT’s GM: KZN Operations, Bulk, Break-Bulk & Cars, the successful and smooth handling of the Casspir armoured vehicle was done in partnership with GAC Laser Specialised Logistics who service a broad range of local and international manufacturers and distributors, specializing in ‘classified’ and ‘dangerous’ cargo.

GAC Laser Specialised Logistics is represented on the Department of Trade and Industry’s panel of Freight Forwarders to provide services to their customers attending international exhibitions.

“This was a very interesting and challenging job for our TPT team at the Durban Ro-Ro Terminal to have been tasked with but fortunately thanks to our state-of-the-art facilities and having such skilled staff on hand to oversee everything, it proved to be a very smooth and uneventful operation.

Our recent GCOS3 upgrade at the terminal meant we were able to keep our clients up-to-date on the progress of their precious cargo in real time and the SIE Service Instruction Entry (SIE) Automation system implemented at Durban Ro-Ro Terminal late last year also meant we were able to easily receive and exchange information into their systems, thereby greatly reducing end-to-end cycle times.

The SIE Automation Solution has been a four-year project that TPT developed in-house and has already improved the speed at which the trading partners, TPT and its customers, can operate. Although this is the first project TPT has done with GAC Laser in KZN, as a result of the seamless and successful handling of this cargo – we have been assured there will be more work coming our way,” stated Siyengo.

The BBC terminal prides itself on delivering exceptional service by their talented workforce that is supported by state-of-the-art equipment and modern technology and this recent project has reaffirmed in the minds of many, the terminal’s status as South Africa’s largest and best equipped car terminal in the Southern Hemisphere.

Siyengo concluded by saying that this was a great team effort and they were very proud to have been involved in such an unusual and thought-provoking project. “We look forward to challenging our team to successfully executing many more unusual projects like this one and we wish the Casspir Project team all the best as they showcase some of SA’s great artistic talent in the US,“ said Siyengo.

Share
Facebook
Twitter
Pinterest
WhatsApp
Linkedin
Previous articleKarachi port operations suspended due to collision of ships
Next articleContainers lost at sea..!!!! Why it happens and what to do when it happens..
RELATED ARTICLES
News