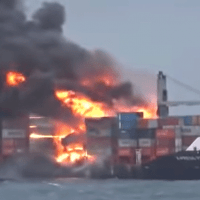 Alone, and on fire – this seems to be the status of X-Press Pearl, a feeder vessel operated by X-Press feeders on their Singapore/Middle East service currently burning in the Indian Ocean close to the port of Colombo, is one of the premier transhipment hubs in the Indian Ocean.

The two month old ship caught on fire initially on the 19th of May 2021 while waiting at anchorage and the fire was subsequently brought under control with the help of the Sri Lanka Ports Authority (SLPA), Sri Lanka Navy and the Sri Lankan Airforce which dropped fire suppressing powder on the vessel.

The Marine Environment Protection Agency of Sri Lanka has said that initial investigations indicate that the fire was burning under a container floor in the vessel.

However, the fire flared up again and is believed to be due to a reaction to some Nitric Acid cargo loaded from Hazira in India.

The situation on board the Singapore flagged vessel seems to have gone from bad to worse with reports of an explosion on the 25th of May and video footage shows some containers and its contents floating around in the ocean with local officials indicating that at least 8 containers have fallen overboard.

Previously, The Marine Environment Protection Authority (MEPA) of Sri Lanka had instructed the owners of the vessel to move the vessel out of Sri Lankan waters to ensure the safety of the citizens and the environment.

“The company that owns the ship, its local agents and the insurance agent were instructed in writing to take immediate action to control the ship’s fuel and chemicals from being mixed with the Sri Lankan marine system,” Dharshani Lahandapura, the Chairman of MEPA was quoted as telling News 1st.

“Although around 400 kilograms of dry chemicals were sprayed to contain the fire, given the difficulties in reaching inside the containers aboard the vessel, the containment efforts are not 100% successful,” she further noted.

While the vessel continues to burn, the good news is that all 25 crew on board the 1400+ TEU vessel have been safely evacuated although 2 of the crew have been admitted to a hospital in Colombo. The vessel is crewed by Filipino, Chinese, Indian and Russian nationals.