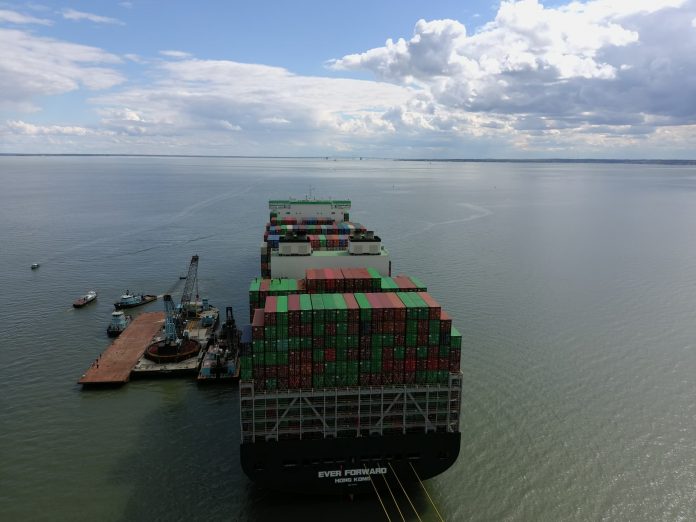 As previously reported, the Ever Forward, a Hong Kong flagged ship stuck near Gibson Island in the Chesapeake Bay channel since the 13th of March 2022 could not be refloated after two attempts.

The US Coast Guard had said that “salvage experts determined they can’t overcome the ground force of the Ever Forward in its current loaded condition. Once the containers are removed, crews will again try to refloat the ship.”

As per the US Coast Guard, the Container removal process began on Saturday the 9th of April 2022 with approximately 500+ containers expected to be transferred to Port Baltimore’s Seagirt Terminal.

The containers will be removed in daylight hours only for safety purposes from both the port and starboard sides and placed on receiving barges which will then shuttle the containers to Seagirt Marine Terminal in Baltimore, where they will be offloaded by shore-based handling gear.

As per William Doyle, Executive Director of Port of Baltimore, as of the 11th of April 2022, ~210,000 cubic yards were dredged and deposited at Poplar Island although the operations were delayed on Sunday due to bad weather. 43 containers have been delivered to Port Baltimore Seagirt with 2 barges currently under operation carrying between 20-23 containers/barge.

Once a portion of containers is removed to reduce the ship’s ground force, tugs and pull barges will attempt another refloat.

And before you ask why only 43 containers since Saturday, consider the work that goes into a salvage operation like this.. Here are some pics of the operation courtesy of Sal Mercogliano.

“Ensuring the ship’s stability and monitoring for any signs of pollution continue to be top priorities for the Unified Command and responders. In addition to regular soundings of fuel and ballast tanks, a naval architect and salvage master are remotely monitoring a recently installed sensor system to constantly evaluate the ship’s stability and integrity and will continue to do so throughout the refloat operation. They will also continue to conduct regular visits to the ship.” the US Coast Guard said in an earlier statement.